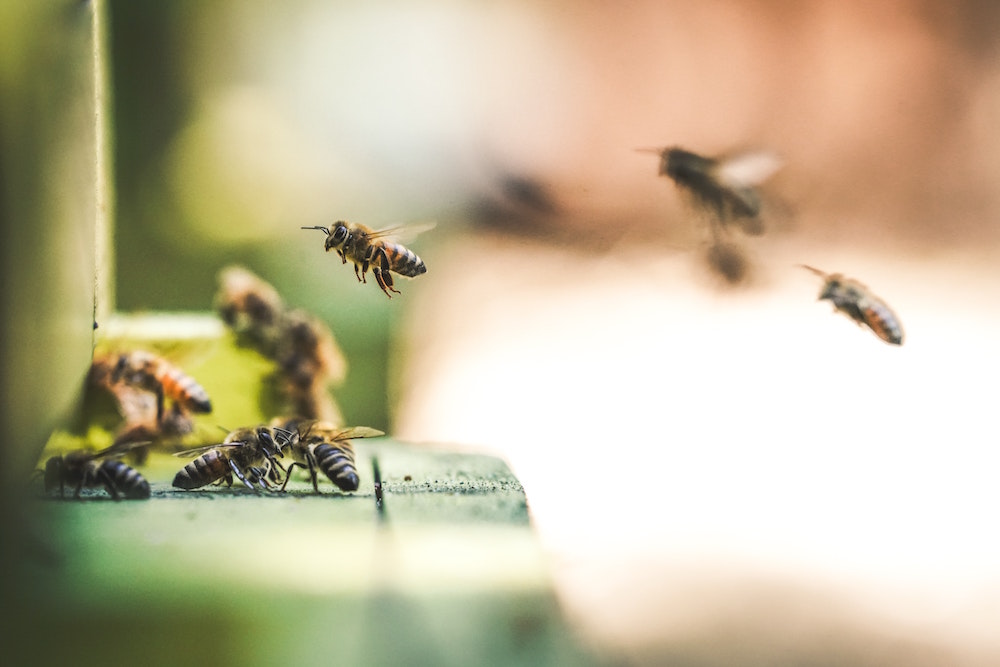 As the weather heats up and flowers bloom in San Diego, honey bees become their most active. With the spring season in full swing and summer up ahead, you can expect to see a few of these insects buzzing around your homes, parks and gardens, collecting nectar to bring back to their colonies. While a fear of bees is common, they generally aren’t looking to sting you. Like the rest of us, they’re just trying to venture out, do their job and bring home the bacon, so to speak.

Whether you spot one, two or a swarm around San Diego, remember that honey bees are highly defensive creatures, and your response plays a large role in their behavior. Here are five things not do when you encounter bees, from the experts in live bee removal.

5 Things NOT To Do Around Bees

Do not swat or make sudden movements.

The first instinct for many is to swat at bees or shoo them away. It’s important to understand that bees perceive the images they see much differently than we do. Their vision is primarily used to detect motion, so quick, jerky movements are often perceived as a threat.

Quick, sudden movements or swatting is a surefire way to stimulate a bee’s defense mechanism. Bees don’t have an incentive to sting, unless they feel that they or their nest are being threatened. If you are experiencing a bee flying around you, it may just be trying to figure out if you’re a giant flower or something of use to them. This is especially true if you’re wearing brightly-colored clothing or perfume. Once the bee realizes that you’re just a human, it will likely fly away. The best approach in this situation is to remain calm and still until the bee departs. Swatting is a signal to the bee that you are picking a fight, and they’ll respond with a sting.

Do not try to remove a hive yourself.

Nothing makes a colony angrier than an outsider disturbing their nest. Especially since each bee inside is hard at work with a specific job to keep the colony functioning. If you spot a hive around your home—especially with bees actively flying in and out—do not approach it. When a hive is disturbed, the bees present will release an alarm pheromone alerting other hive members in the area to immediately swarm. Those in the hive will begin pouring out to attack the nearby threat.

When you see a hive, back away calmly, leave the area and call a professional. But, if you accidentally disturb the hive, flee the area immediately and head for an enclosed space like your car or house.

Do not plug the entrance to the hive.

This is especially true if the entrance to their hive is a small hole in the side of your house! If you plug their exit, they will just find another way to escape, which could end up being the interior of your house. For example, bees that have established a hive in an attic with no way out may begin entering the house through recessed ceiling lights. If you’re alarmed by bees outside, imagine how alarmed you’ll be when you open the door to your bedroom and find 40 bees flying around!

Do not stay in the area after being stung.

The primary form of communication among bees occurs when pheromones are released. After stinging a mammal, the stinger remains in the skin and the bee releases alarm pheromones to alert any nearby hive mates to attack. After a person has been stung, they’ve been effectively marked as the threat. Any nearby bees will come to their comrade’s defense, and if the victim is nearby a hive, they may be susceptible to a swarm.

If you become the target of a swarm, run as quickly as you can in a straight line. Bees are relatively slow flyers, with a speed of about 15 miles per hour, and can be outrun by healthy individuals. When running from a swarm, do not stop. The bees will chase for a moderate distance but will likely give up after about 1,000 feet.

If attacked, do not dive into water.

One common misconception, thanks to some movies, is that if you’re being attacked by a swarm of bees you should jump into water. While the bees definitely won’t chase you underwater, they will be waiting for you above the surface. The bees will hover above the water, waiting for you to emerge so they can attack. Eventually, you’ll come up for air, and your face and head will be the first thing out of the water for the bees to sting. They’ve been known to wait hours above the surface of water for a target, stinging each time the person came up for air.

Most of the time, an encounter with a bee is harmless. Remember, they rarely attack unless they feel threatened, so avoiding certain threatening behaviors will keep you in the clear. And, when you spot a beehive in or around your home, give us a call to remove the honey bees safely and effectively.

And if you have a hunkering hive or a scary swarm, give us a call at D-Tek Live Bee Removal for the best in live, humane honeybee removal company in San Diego.