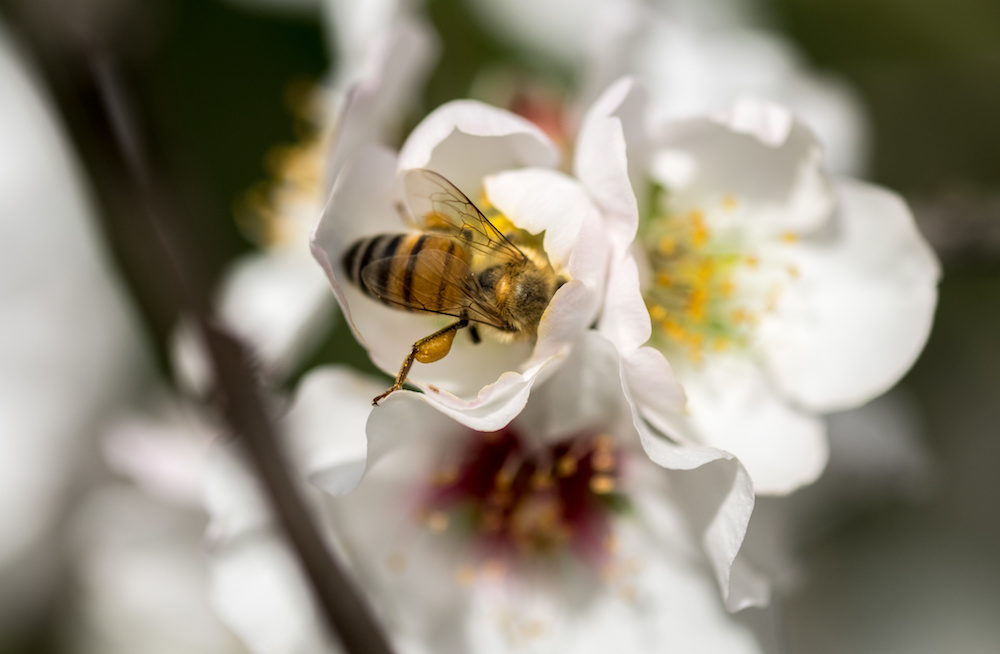 Have you ever wondered where your almond milk comes from?

If you guessed honeybees, then you would be correct. Every February, honeybee colonies descend upon Central California for the annual pollination of the almond orchards. This short pollination window of 4 to 6 weeks provides about 80% of the world’s almond supply. Not only does this process provide most of the almonds that you find in your almond milk, granola bars and other snack foods, it is a huge business that generates millions of dollars in revenue in just a few short weeks.

Almond growers rely on the honeybee pollinators to sustain their businesses. However, it’s not as simple as it may seem. Beekeepers have been experiencing record losses of their hives because of a variety of factors that we will discuss below. Some believe that almond pollination season is one of the most serious threats jeopardizing honeybees today. As our demand for almond products grows, honeybee colonies are being taxed in ways that they’ve never been before.

Since almond season is just around the corner, we thought we would explore almond pollination and discuss some of the threats to honeybees that have beekeepers worried.

The Almond and the Honeybee

Did you know that the almond industry is an $11 billion market? It is estimated that the average American consumes more than 2 pounds of almonds each year – much more than ever before.

The exponential growth of the almond industry means that almond growers need more hives during the busy pollination month to produce the output they need to satisfy the market. Estimates indicate that an additional 300,000 acres of almond orchards will need to be harvested over the coming years to meet the increasing demand.

What does this mean for honeybees? It means that almond growers will need to source 600,000 more honeybee hives to pollinate their orchards in the coming years.

At the start of the almond season, growers will rent beehives for approximately $200 each. For every acre of land, an almond grower requires about 2 hives to do the job. Almond season, which typically lasts from February to mid-March, will require approximately 2 million hives to pollinate every acre of land. If you do the math, it’s pretty clear: there is a lot of money at stake for almond growers and beekeepers alike.

While many beekeepers make the majority of their money during almond season, the reality of these big numbers does not tell the whole story. The almond industry and other threats to honeybees continue to grow, and many beekeepers see record-breaking declines in their hives. A survey cited by The Guardian indicates that 50 billion honeybees were wiped out during the winter of 2018- 2019.

Varroa mites and other parasites, habitat loss and exposure to pesticides are indicated as some of the most significant overall threats to the honeybee population. However, the boom of the almond industry causes a lot of concern for many beekeepers.

The high demand for pollinators means that many of the honeybees travel hundreds of miles across the country to the central California almond orchards. Transportation can be very hard on the honeybees, especially those who are already sensitive. And with all of those bees in one general area, there is a higher risk that disease will spread across the honeybee colonies.

Honeybees are vital to the almond industry. There simply wouldn’t be almonds without them. Because of the critical issues related to honeybees and almond pollination, several groups are trying to improve the process for the benefit of the honeybees and the growth of the almond industry. The industry itself has recognized the need to address these concerns, as well as a number of state agencies and nonprofit organizations.

It is so easy to go through the day without realizing the critical work of the honeybee. Hopefully, this article helped you understand how honeybees play a very real role in your day to day life.