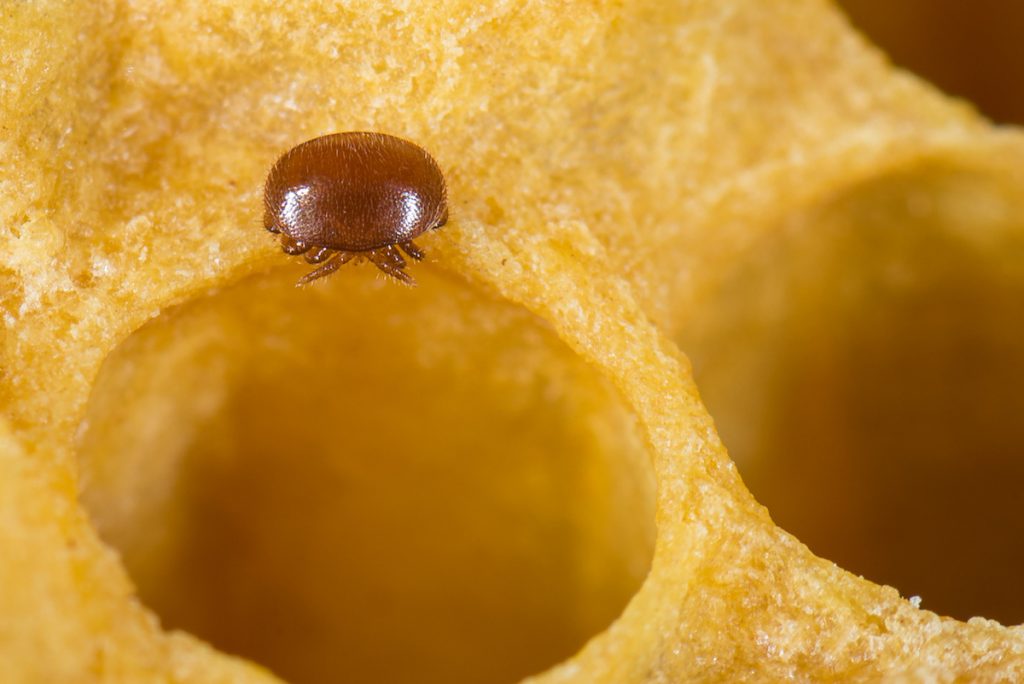 Honeybees are mighty, but they certainly are not invincible. Bees face threats from all sides, including habitat loss, pesticides and disease. But, did you know that one of the greatest threats to the honeybee population is only one millimeter in size?

Varroa mites feed on honeybees and spread deadly viruses throughout colonies. The small but dangerous Varroa mite can’t see or hear, but it can destroy honeybee colonies with relative ease.

An infestation of the Varroa mite is a significant concern for beekeepers. For the average person, these little guys are probably something you never knew existed! As honeybee enthusiasts, it’s essential that we learn more about Varroa mites, how they prey on honeybees and what is being done to stop them.

What is a Varroa Mite?

The Varroa mite, also called the Varroa Destructor, is a parasite that feeds specifically on honeybees. They are usually reddish-brown in color and tiny, about the size of a pinhead. Even compared to a honeybee, these mites can be considered miniature! The Varroa mite may appear like a simple critter, but it is specially adapted to prey on honeybees.

Using their senses of smell and the sensory hairs on their legs, Varroa mites can locate honeybee larvae. The mites have grips on their feet that allow them to hold on to the bee’s body. Their suckers enable them to feed off the hemolymph (you can think of this as the blood of the bee) and inject deadly viruses directly into the bee’s system.

And here’s a little history lesson: The Varroa mite was first seen in Asia in the early 1900s. The mites were later introduced to the Western honeybee when European settlers visited Asia. Since then, the mite has spread across the globe and is found in every major part of the world, except for Australia.

The Life Cycle of the Varroa Mite

The Varroa mite has a rather interesting life cycle. And it all begins with the queen bee.

As you know, the queen spends her days laying eggs. In the busy season, she can lay 2,000 eggs in a day! The eggs are housed in individual cells that are specifically for the brood to grow and develop. The sneaky Varroa mite knows this. Her goal is to enter the brood cells to begin her devious work.

Just before the cells are capped with beeswax, the female Varroa mite will enter a cell and hide beneath the larvae to keep away from the meddling nurse bees. It is thought that the Varroa mite prefers to intrude on the cells of drone larvae because they take more time to pupate. Once the cell is capped, she will begin feeding on the developing bee. In three days, she will lay about five eggs, the first of which will be a male, and the following 3-5 eggs will be female. The newly-hatched Varroa mites will feed off the bee pupa until it is time for the mites to mate again.

The almost adult honeybee is now ready to leave the cell. But there is a big problem. The honeybee is very weak because the mites have been feeding off the hemolymph and infecting the bee with viruses. With a depleted immune system, the bee will live a significantly shorter life. The sick honeybee leaves the cell with the Varroa mites attached, unknowingly assisting in the spread of the mites throughout the hive, and even to other nearby colonies.

Because of this process, honeybees can spread and die from several viruses. One of the most prevalent viruses is Deformed Wing Virus (DWV), which causes baby bees to be born with abnormal wings. Another common virus is Acute Bee Paralysis Virus (ABPV), which causes damage to the brain and results in atypical behaviors and disorientation.

What Can Be Done About Varroa Mites?

Varroa mites are a big problem for many beekeepers in North America and Europe. Because the mites are still relatively new to these regions, honeybees have been unable to develop any kind of resistance to the mite, as some Asian and African honeybees have. Beekeepers must test their hives regularly to track the mite levels. There are a variety of techniques that apiarists use to manage Varroa mites, including breaking the brood cycle and removing weak hives.

The small but mighty Varroa mite is a significant concern for beekeepers and bee lovers alike. At present, there are no viable remedies available that will fight Varroa mite infestations and protect our precious honeybees from disease.