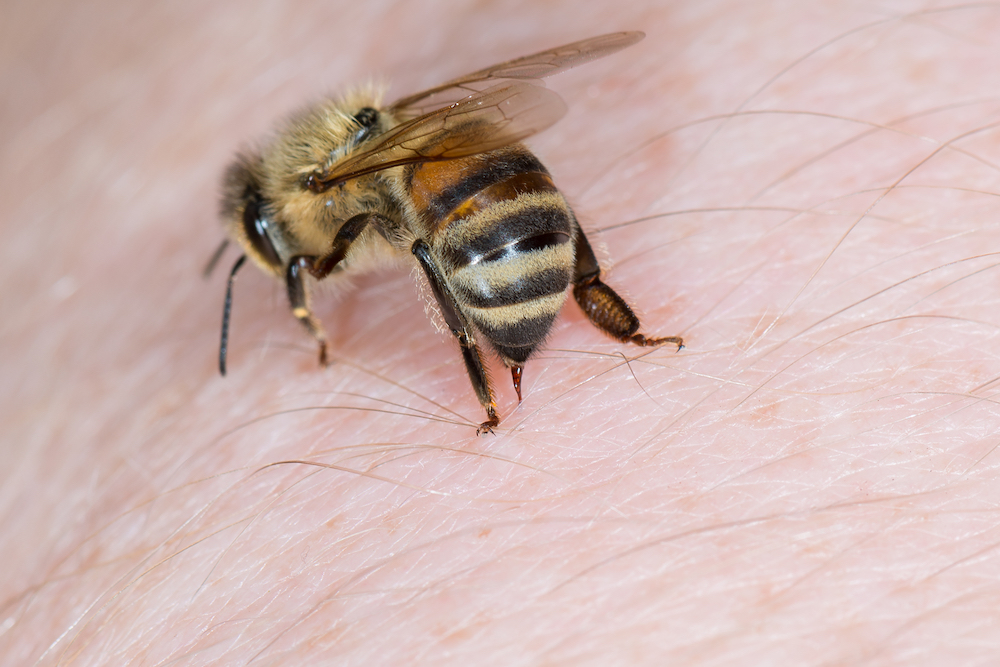 If you’ve been reading the D-Tek Live Bee Removal bee blog for a while, you already know that honeybees are vital to pollination. While not the only pollinators out there, bees are one of the biggest contributors to helping our plants and flowers reproduce year after year.

Aside from their pollination and honey-making abilities, honeybees have another superpower – the ability to sting! Because of this not-so-pleasant attribute, it is advised to keep your distance from bees unless you are a professional. A bee sting sure can hurt!

Why Do Bees Sting?

We hate to break it to you, but most bees are not interested in you. They have too much work to do to bother worrying about humans. Unless, of course, you mess with their hive. Most bees that you see buzzing around are foraging for nectar and pollen to bring back to the rest of the colony. They really couldn’t care less about you.

However, if they feel that their hive is being threatened, you better watch out! Just like we have security systems to protect our homes and businesses, honeybees have ways to keep their families and properties safe. Their barbed stinger is their greatest defense.

When a honeybee senses a threat and stings a human or animal, the bee releases a special odor called a pheromone. The pheromone acts as a signal to other bees, letting them know of the interloper and encouraging them to join the attack. Through the release of their pheromones, a honeybee can call in hundreds of bees to the scene. And this is something you definitely do not want to be a part of!

Do All Bees Sting?

If you are like most people, bees trigger thoughts of honey, pollination and bee stings. But, do all bees sting? The answer to this question is no. The female worker bees and queens have stingers; male drones do not. So, when you get a bee sting it is most likely from a worker bee. While the queen does have a stinger, she rarely uses it because she almost never leaves the safety and comfort of her hive.

The stingers on a worker bee are barbed, meaning that they have little projections that allow the stinger to remain stuck in the victim’s skin. Once the stinger pierces the skin, the bee injects bee venom known as apitoxin. For some people, the bee venom causes an unpleasant feeling that can include pain, itching or discomfort. For others who are allergic to apitoxin, it can be very dangerous and even lethal.

After the bee inserts the stinger, it usually gets stuck in your skin and tears from the bee’s body, resulting in the death of the bee. But this isn’t the end of it! The stinger that remains in your skin can continue to release venom, which is why it is important to safely remove the stinger as soon as possible.

How to Avoid a Bee Sting

Although we can’t completely eliminate the possibility of getting a bee sting, there are some things we can do to reduce our chances. One of best pieces of advice we can give is to leave bees and their hives alone. As we mentioned, most bee stings occur when bees feel threatened. If you spot a hive on your property, do not attempt to remove it yourself. Instead, hire a reputable live bee removal company to do it for you. They will have the skills and equipment needed to do the job safely.

Bees are attracted to bright colors and sweet smells. Usually, beautiful flowers catch their eyes. Sometimes, other things will attract them if they have similar traits. Humans wearing bright-colored clothing, sugary hands, soda cans and certain foods can all entice honey bees. If you want to avoid attracting the attention of a bee, avoid wearing bright colors and steer clear of sugary drinks and food.

What To Do If You Get Stung?

Even if you’ve taken all of the precautions, there is a chance you may unwittingly encounter a bee and get stung. In fact, many people get stung by accidentally stepping on a bee while walking in the grass. No matter how or why it happened, it is important to act fast after a bee sting.

If you or the person stung is allergic to bee venom, call 911 right away to get medical attention. Otherwise, the first step is to safely remove the stinger to stop the flow of bee venom. Then, wash the area with soap and water and apply ice to reduce the pain and swelling. You may also want to take a pain reliever to help with pain and swelling if ice isn’t doing the trick!

Learn more about how to care for a bee sting by reading these articles:

How to Treat a Bee Sting

How to Keep Kids Safe From Bee Stings

How to Treat and Avoid Bee Stings