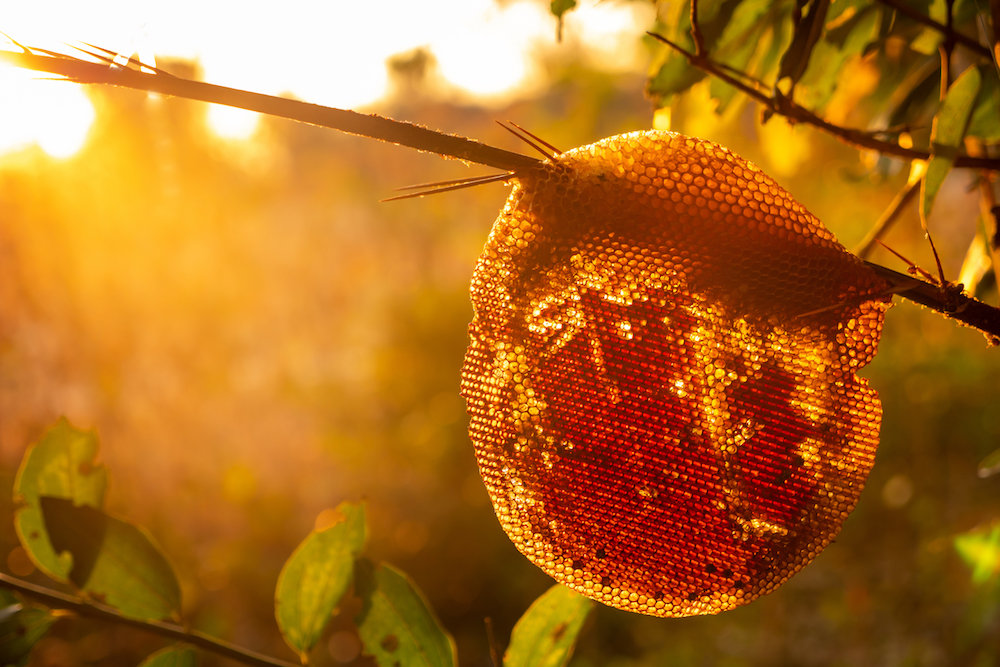 Honeybees are highly social animals living in tight knit societies called colonies. A colony consists of a single queen (usually, we’ll get to that later), a few hundred male drones and lots and lots of female worker bees – to the tune of around 20 to 80 thousand.

Just like a human colony, it’s not all adults though. Babies can be found in the colony in various stages of childhood from eggs and larvae to pupae. The stages of bee childhood are referred to as metamorphosis.

If you thought human children were hard to deal with, imagine waking to find your child sprouting some new limbs. Bees go through some pretty drastic changes as they mature. Bee eggs begin life packed into individual honeycomb cells, all laid by the single queen of the colony. If the eggs are fertilized, they’ll be born as female worker bees. If they’re unfertilized, they’ll become male drones.

When they’re born, eggs hatch to become larvae. A larva is a limbless little grub and a complete eating machine – eating honey, nectar and pollen all day long. Larvae will molt repeatedly during this time as they grow.

When they’re finally big enough after a few days of gorging, worker bees will seal the larvae in with wax into their cells where the larvae will spin a cocoon and enter the pupa stage. This is where, much like a butterfly, they will develop their adult body – sprouting wings and limbs and turning into either a worker or a drone. When they hatch, free time is over. No more lounging and eating for the new adults as they join the busy goings-on of the colony.

Being a drone is kind of a mixed bag. They’re born with only one job – fertilizing a new queen. This occurs in a grand, aerial bacchanalia. Things aren’t quite as ideal as they might sound though. For one, all the drones are involved – so it’s hardly a romantic interlude when a hundred of your brothers all show up on your date. Oh, and did we mention they drop dead after mating? Yep. Further, any that manage to somehow survive will be thrown out of the colony come fall when food stores get more scarce.

The vast majority of the colony are workers. Workers are all female and the ones you usually encounter in your garden. They’re also the armed ones – equipped with barbed stingers. A worker bee lives a rough, short life of around six weeks.

If you thought drones had it tough, you’re going to find “having it tough” is a way of life for bees. The worker is responsible for gathering food, feeding the larvae, making honey, caring for anyone in the hive that isn’t a worker and dying to defend the colony. Yes, dying. Unfortunately that stinger they’re armed with is only designed to stab an enemy. It’s barbed, so it will go in but not come out. This results in their abdomen being torn from their bodies after they sting. On the bright side for us humans, this makes them understandably a bit picky about whether they sting someone.

The last member of the colony is the queen. And yes, her job is no cakewalk either, regardless of her title. During her mating with the drones early in life, she stores up millions of sperm from the event that she’ll use for the rest of her life. That life includes laying up to 2,000 eggs per day! A queen can technically live up to five years, but the endless egg laying takes its toll – so they usually only last two to three years.

Being a queen can be a stressful job. Picture this – you’ve just come off a shift of laying 2,000 eggs. The workers have been watching you and can tell your getting slower at your job though. In response, they build special cells and start raising several contenders to replace you. When the first new queen hatches, her first order of business will be to kill all the other would-be queens waiting to hatch. Then there’s you, the old queen. Your odds are not good at this point. However, there are exceptions as sometimes the old queen will be left alive to keep laying eggs alongside the new queen. As a rule though, there is usually only one queen.

Swarms are a happy exception to the one queen rule. Sometimes a colony is doing great. Really great. In fact, they’re getting overpopulated for a hive. When this happens, a new queen is born to rule the colony. The old queen will abdicate her throne. However, she’ll also take about half the colony’s workers with her.

When the queen and this new colony take to the air, they are called a swarm. These swarms typically take place between spring and summer. So, if you happen to see a swarm, don’t panic. It’s not going to end like some cheesy natural disaster movie. They’re just looking for a new home. That being said, use some common sense and don’t disturb them as they’ll feel more vulnerable than usual, and this can make them more aggressively defensive.

So, that’s the rough and industrious life of the humble honeybee. It’s not an easy life for a creature that gives so much to the world – from nature’s best sweetener in combs full of honey to covering our dinner table in food by pollinating our fruits and vegetables.

If you want to do something back for these little guys, avoid using insecticides on them. Instead opt for live bee removal. There are companies available that will remove the hive for you and relocate it somewhere where it can continue to be productive.