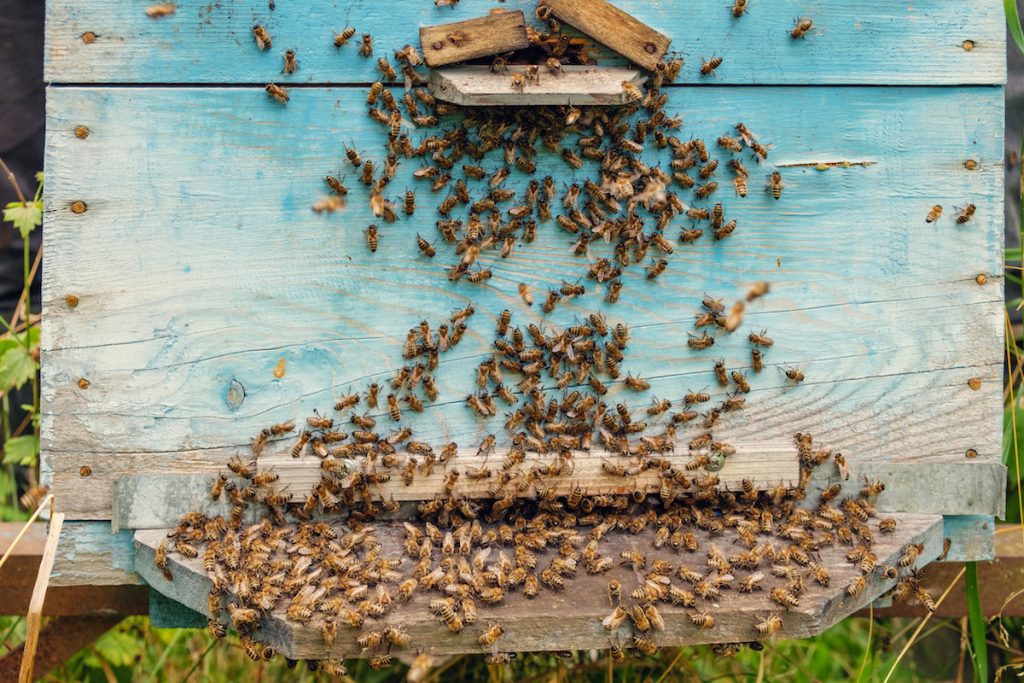 While the queen bee gets a lot of attention, the real stars of the hive are the worker bees. From the moment they emerge from their cells, worker bees begin the first of their many jobs within the hive. If worker bees wore hats, they would wear a lot of them!

To get a better understanding of how the colony works together to support itself, it’s essential to know more about the jobs of the worker bee. Although they only live for about six weeks in the busy season, every day is packed with activity to prepare the hive for the upcoming winter.

The Many Jobs of the Worker Bee

After the queen lays an egg, it takes about 21 days for the egg to mature into an adult worker bee. Young worker bees start as house bees, tending to the many duties inside the hive. About halfway through their lives, they venture out of the hive to begin their fieldwork as foragers.

Beehives are some of the most naturally sterile environments. Young worker bees help to keep it this way in a few different ways. Their first responsibility is to clean their own cells to prepare them for the next egg or stores of nectar and pollen. They will also clean nearby cells to keep things moving efficiently.

These young bees are also responsible for removing any dead bees or larvae that did not mature into adult bees from the hive. They do this to prevent any disease that could put the whole colony in danger.

The next role of the worker bee is to care for the larvae and young drones. They will feed the larvae royal jelly, pollen and nectar, visiting each cell about 1,300 times each day. Worker bees also groom, feed and clean up after the drones until they are old enough to care for themselves.

Like true royalty, the queen bee needs attendants to help her take care of her basic needs. She is busy after all, laying up to 2,000 eggs a day! Worker bees aid the queen by feeding, grooming and cleaning up after her. They also help to spread her unique pheromone, signaling to the rest of the hive that the queen is still alive and well.

Pollen and Nectar Collectors (Days 12 to 18)

When the foragers return to the hive with their hauls of nectar and pollen, house worker bees are ready for action. Their job is to transfer the new resources from the foragers to their designated cells. Worker bees will add enzymes to the nectar to help ripen it and prevent it from spoiling.

One of the most important jobs of a worker bee is to control the temperature within the hive. Known as fanning, the workers will flap their wings vigorously to increase the flow of air and reduce humidity. Other bees will provide water to the fanning bees to help in the cooling process. They also fan their wings to evaporate water from the honey until it is the right consistency to stay fresh over the winter.

Older worker bees begin to produce wax from glands in their abdomens. The glands produce small flakes of beeswax that the bees chew until it is the right consistency. The beeswax is used for making new honeycomb cells and capping those that contain honey and larvae.

Before going out into the field, a worker bee will take on guard duties. Their job is to stay near the entrance to the hive and prevent unauthorized visitors from intruding. How can they tell if a bee does not belong? Guard bees use their sense of smell to detect when a bee is from another colony.

Finally, the worker bee can emerge from the hive! Foragers visit flowers, usually about 100 flowers on a trip, to collect pollen and nectar. The bees will often travel several miles away from the hive to find the best food sources. Upon returning to the hive, they drop off their wares to younger worker bees who transfer the nectar and pollen to an open cell.

From the day that they are born, worker bees play a huge role in the hive. They act as housekeepers, nurses and assistants, all before they are two weeks old! As you can see from the many roles that they hold throughout their lives, they aren’t called workers for nothing.