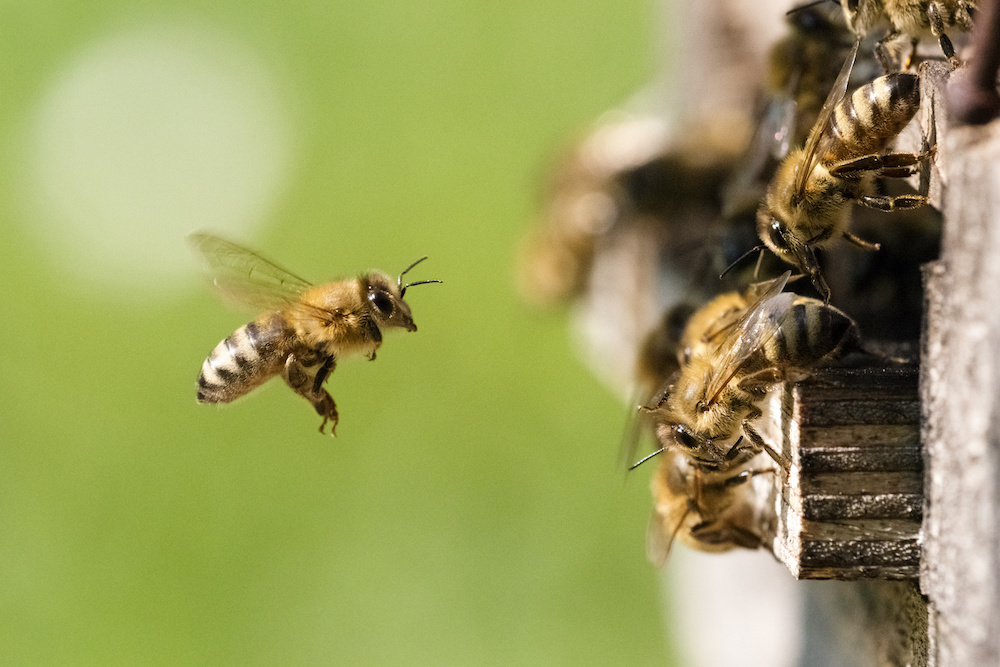 All honeybees have a role and fulfill specific functions in the hive. From the matriarchal queen who leads the colony, to the worker bee who does the majority of the heavy lifting, each member of a colony has its purpose. Drones also play a vital role in the hive. They ensure the success and sustained prosperity of the colony.

What Role Do Drones Play in the Colony?

A drone, which is a male honeybee, has the primary purpose of mating with unfertilized queens. Although this may seem like a relatively simple job, in fact, it is a pivotal need of the colony. Not only are drones one half of the equation to ensure propagation, but maybe more importantly, they provide the necessary variety of genetic possibilities for a colony.

Drone bees aren’t relegated to mating with just the queen of their colony. In fact, they are often found away from a hive in a collection of other male honeybees called Drone Congregation Areas (DCAs). These DCAs are where potential mating matches occur. The male drones hover above the ground at a DCA, waiting for a queen to approach. Queens who are ready to mate arrive at these areas and, if close enough to the DCA, will begin to attract the drones to themselves. During these mating flights, the drones seek to be the closest in proximity to the queen. These flights are not fights, but rather a contest to see who can be the nearest to their potential mate.

The queen may mate with multiple drones from multiple colonies, often 5 – 19 drones in one mating flight! This is where the importance of the drone for the sustainability of a colony becomes clear. By mating with drones from different colonies, the genetic traits gathered through many generations are potentially passed on to that queen’s offspring. This has benefits ranging from new resistance to diseases to hygienic behaviors.

To accomplish this mission, drones have a unique anatomy compared to that of their sister worker bees. They are one of the quicker bees in the colony, as their flight speed must at least match that of a queen. Drones are often the largest bees buzzing around the colony (close in size to the queen at least), and they have larger eyes than their counterparts. Their large eyes help ensure that they can identify a queen approaching a DCA. Their large bodies allow for the mechanics required to accomplish the mating act with a queen. After all, mating with a queen if they were much smaller would not be possible.

The Lifecycle of a Drone

Unfortunately for the drone, successfully coupling with a queen during a mating flight is also the last function they will ever provide. The anatomy of a drone ensures their demise. The tools required to deliver the sperm to the eggs are separated from their bodies after the mating ritual. Although their mission in life has then been accomplished, they perish shortly after that.

To add to the somewhat tragic life of the honeybee drone, they are also seen as the most expendable part of a colony when times are difficult for the hive. Workers, who collect and manage the available food stores within the hive, will prevent drones from accessing food during the winter. Eventually, the drones are pushed out of the colony and left to forage. Without the support from the entire colony, they inevitably perish to hypothermia or starvation.

During their life before mating and the subsequent end of their life, which is, on average, around 90 days, there are a limited number of functions that they do provide. Although they do not help with gathering nectar or pollen, as the female workers do, they will help in regulating the temperature of a hive. They do this by either shivering to create more heat, or by flapping their wings in a coordinated attempt to increase airflow and create cooler conditions. The function of regulating the temperature is essential to the survival of eggs and larvae.

Drones do not have stingers, so they cannot fight against potential threats. However, they are aware of dangers to their colony and will attempt to confuse or disorient aggressors by buzzing near an offender.

All Honeybees Have a Role in the Hive

Even though drones have a limited function within the colony, what they accomplish in that short time is critically important. Without them, the growth of the honeybee population would be impossible! Many think of drones as lazy or that they survive on the hard work of others, but the truth is that drones, like their sisters and their queen, fulfill the exact role that nature has intended for them.