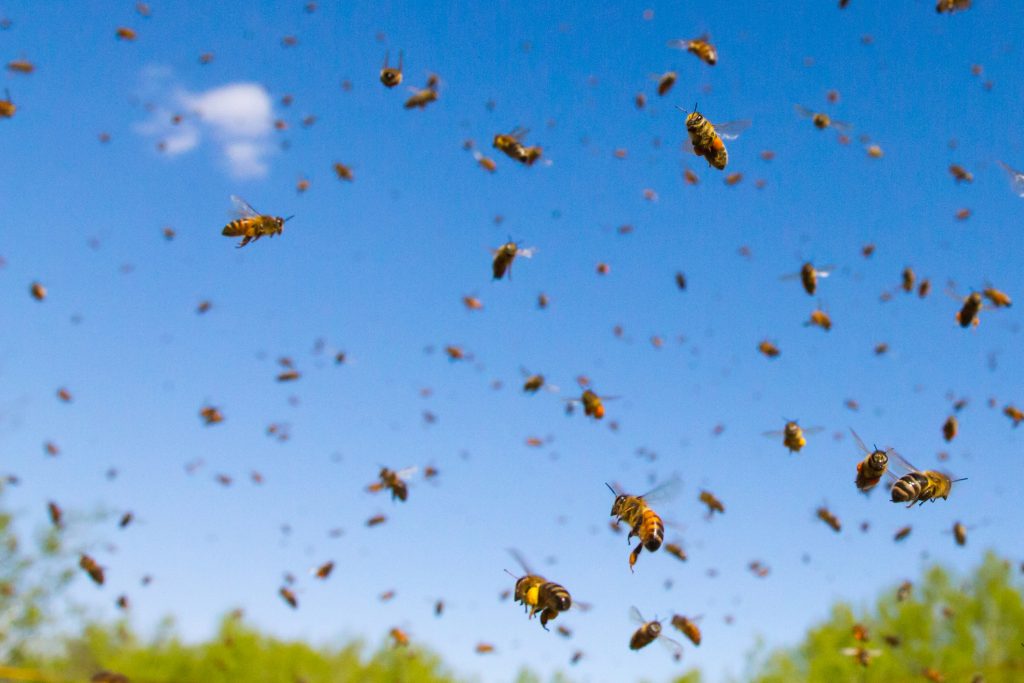 As one of the leading bee removal companies in the San Diego area, we frequently get calls from concerned San Diego residents who want to know what to do about their honey bee situation. The first thing we do is ask some key questions to determine whether they have a bee swarm or a bee hive on their hands. The difference is huge!

Swarms typically look like football-sized clusters of bees. Swarms can include tens of thousands of bees and they are often seen in a tight-knit bunch. They wait clustered together until the scout bees have found them a new home. Swarms frequently hang out in this temporary location, such as the branches of a tree or the side of a fence, for a few hours or sometimes a day or two. After this brief waiting period, they will move into their new home and seemingly disappear. However, it is not always best to ignore a swarm.

You see, swarms will move along after a short time. The problem is that they move on to a new home nearby. What if their new residence is in the roof of your home or the wall of your garage?

After bees have left the swarming stage, they quickly move into the new location and immediately begin building their new hive. The worker bees get started on building cells, foraging for nectar and pollen and taking care of the young that the new queen produces. Leaving a swarm can often leave you with a bee hive situation in the very near future.

When bees begin to settle in to their new home, you will see lots of bees diligently entering and exiting the hive. They won’t be lollygagging around or hanging out in clusters outside the hole. They have already begun work – no wonder we call them busy bee!

Removing an established hive is much more challenging and dangerous than removing a swarm for a number of key reasons. Swarms are generally docile. Swarming bees do not have a food source with them since it is just a temporary situation and they have to pack light. Because of this, they want to conserve as much energy as possible.

A beehive, on the other hand, is a much more permanent structure that the bees must defend and protect. The hive contains the queen, the larvae and their stores of honey. They have much more to protect and therefore can become aggravated during the bee hive removal process if it is not handled by a professional.

Already established bee hives can often be constructed in hard to reach places that make removal much more difficult and dangerous. Hives can be quite heavy, causing damage to your structure that could pose an unsafe situation for you and your bee removal technician.

Established hives may also attract other pests and insects that could cause additional problems. Honey has been known to seep through the walls causing extensive damage to your drywall.

When to Call Bee Removal Professionals

Unless you are okay with a huge bee hive developing in your attic, you should call a live bee removal professional at the first sign of increased honey bee activity. Do not immediately default to ignoring a swarm, thinking they will move along in a few hours. It is best to call in an expert who has a keen understanding of bee behavior and can look for signs of a bee infestation on your property. It is always better to address the situation while bees are swarming than it is to attempt to remove an established colony.

D-Tek Live Bee Removal has been helping San Diego residents safely and humanely remove honey bee infestations from their homes and businesses for almost 20 years. Our technicians have a thorough understanding of honey bee behavior and know how to best address a wide variety of situations.

Choose the humane option by calling in a live bee removal company like D-Tek Live Bee Removal instead of an exterminator. Even if you don’t want to be roommates with 20,000 honey bees, it doesn’t mean you should put them in harm’s way by calling in an exterminator who will use harmful chemicals that will kill the bees.

Do you think you have a swarm or bee hive on your property? Call the trusted bee removal pros at D-Tek Live Bee Removal today for a free inspection and to learn more about our humane San Diego honey bee removal services.