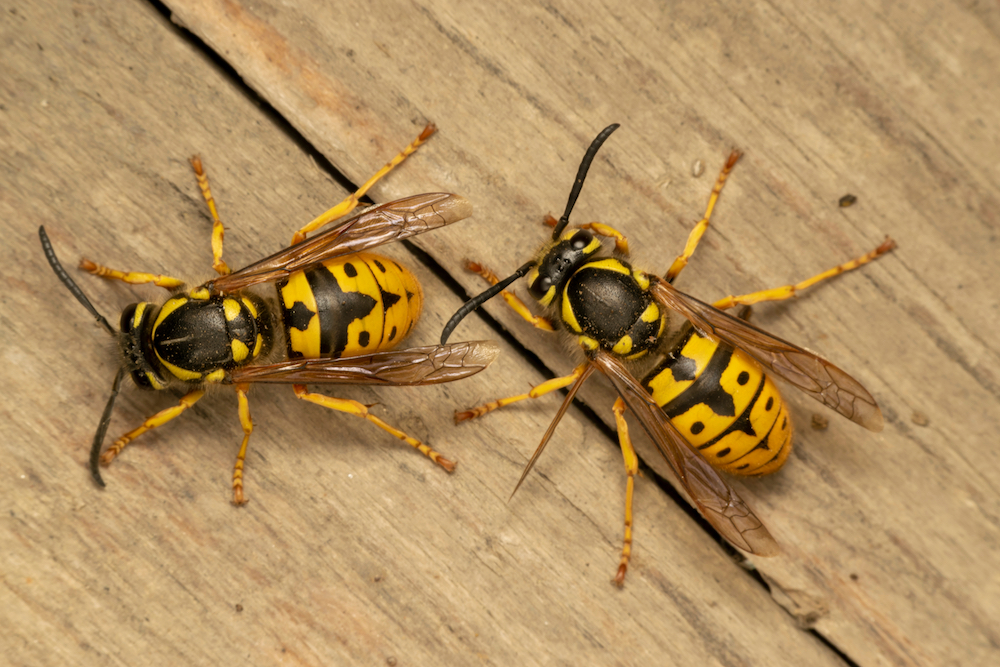 What’s that insect buzzing around? If it’s black and yellow and has a stinger, many people just assume that it’s a bee. But many of the buzzing creatures that you see are not actually the same species. In fact, they are quite distinctive.

Wasps and bees may share some similar characteristics, but the reality is that they are very different. For example, wasps and bees have slightly different body structures, eating habits, benefits, homes and personalities.

Today we’re going to talk about some of the differences between wasps and bees so that you can be more informed and know what to do if you encounter either of them in nature.

The Differences Between Wasps and Bees

Although both bees and wasps have a relatively thin waist (the area between their thorax and abdomen), wasps have a narrower waist and torso. Wasps are also shinier and have a smooth-looking appearance. During flight, the legs of a wasp will hang down.

Bees, on the other hand, have a plumper appearance and hairier bodies. Their legs do not hang during flight; rather, their legs contain pollen baskets that carry the pollen they collect back to the hive. Bees also have a barbed stinger that keeps it stuck in the body of their victims, preventing bees from stinging more than once. Wasps do not have a barbed stinger, which allows them to sting their victims multiple times.

Many people don’t realize that wasps are carnivores! Wasps feast on insects as well as nectar and some fruits. Bees do not eat insects. Instead, they eat the nectar and pollen that they gather from flowers during their foraging trips. They can also be attracted to other sources of sugar like those found in our trash bins or soda cans.

Both bees and wasps play essential and specific roles in our ecosystem. Most of you by now know how important honeybees are to the agricultural and food systems throughout the world. Researchers estimate that honeybees are responsible for almost 80% of the pollination that takes place. Their work is responsible for many of the foods we eat. Like honeybees, bumblebees are pollinators and help contribute to the cycle.

Bees and wasps construct their homes in different ways. Wasp nests are typically gray in color and look almost like paper. They are made of wood fiber and saliva. Their homes can be built in the eaves of roofs, in trees or even underground. Honeybees construct intricate hexagon-shaped cells out of beeswax that make up the honeycomb. Beehives can be found in trees, roofs, attics and many other structures.

Contrary to what many people believe, bees and wasps are not out looking to sting humans. However, both can sting humans if they feel that they or their hive is being threatened. Bees are generally considered to be less aggressive than wasps. In fact, because of their barbed stinger, honeybees typically can only sting once before they die. Wasps are considered to be more aggressive than bees. Because they do not have a barbed stinger, wasps can sting their victims multiple times.

What should you do if you encounter a bee or wasp?

Because both bees and wasps have the potential to sting you if threatened, the best thing to do is to avoid both species if possible. Do not swing at them or attempt to spray them with the hose–this will just aggravate them and increase your chances of getting a nasty sting. Calmly move away from the area without swatting your arms or stand still until the bee or wasp decides to leave. Remember, neither of these species want to sting humans; they do so when they feel that they might be under attack.

If you do receive a sting by a wasp or bee, quickly apply ice to the area to reduce the swelling. If you see signs of an allergic reaction, call a medical professional right away. Allergies to bees or wasps stings can be very dangerous and even lethal, so obtaining proper medical attention is critical.

Do you need live bee removal in San Diego?

D-Tek Live Bee Removal is the leading expert in humane bee removal in San Diego and the surrounding communities. Without using pesticides or other harmful chemicals, our professional bee removal technicians can safely remove a beehive or swarm from your business or home without harming the bees. After the removal process, our team re-homes your bees with a local beekeeper who will assist them in continuing their work– pollination!

If you are looking for live bee removal in San Diego, call in the best with D-Tek Live Bee Removal. Our specialists are looking forward to helping you protect your home or business from unwanted bees safely and effectively.