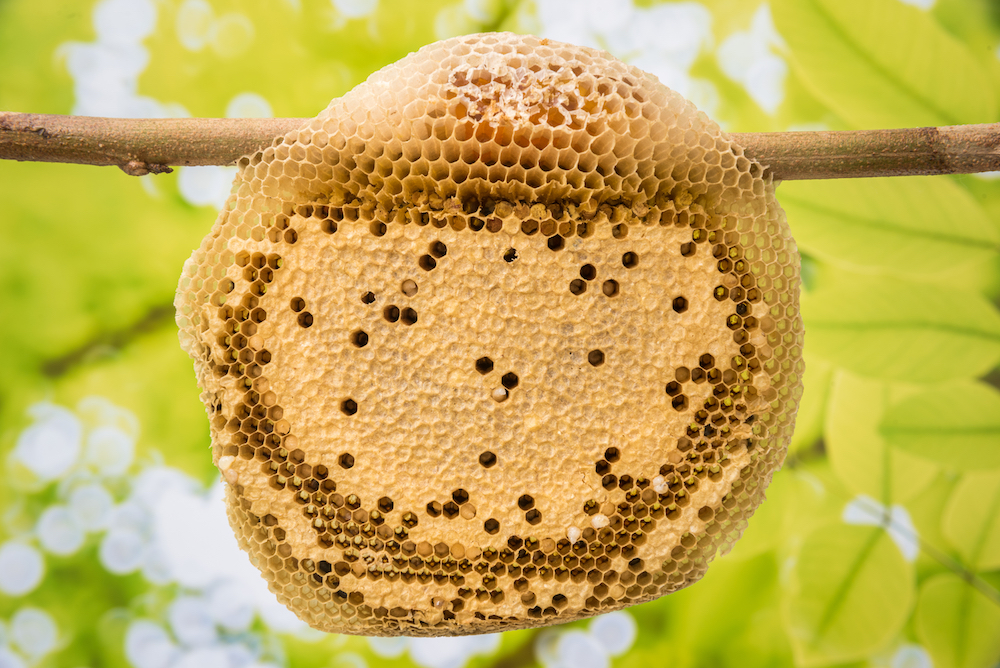 Watching a bee weaving about the garden might make you think that they lead quite a carefree life! After all, they spend their days sunbathing on flowers and lazily eating sweet nectar. Nothing could be further from the truth. That little guy is the very picture of industry.

A bee is a highly social insect, part of an organized, hardworking colony. Bees flourish because of their well-ordered, communal existence – each member doing its part for the health and success of the hive. If you’d expect the hive itself to be as organized as the little creatures that built it, you’d be absolutely right!

Here are some fun facts about honeybee hives, both the wild kinds found in nature as well as the ones humans build to farm bees for their honey.

Starting with the wild hives, you can find them in hollowed out trees, caves or rock cavities. In milder climates, they may also be built exposed and off the ground hanging from trees or other structures. Unfortunately for all involved, your house may look like a hollowed-out tree. If that is the case, please accept a sincere apology on behalf of all bees. They may be smart little insects, but at the end of the day they are only smart for insects – there are no bee rocket scientists.

Let’s not dwell on your attic though. We were talking about the hive.

The hive entrance is a reinforced area built of propolis. Propolis, or bee glue, is made by mixing saliva, beeswax and plant resins. This duct tape of the bee world is used for everything that needs gluing or reinforcement – from the secure entrance to holding the hive in place.

The hive itself is built of beeswax, a wax produced by glands in the abdomen of worker bees. The wax is built up into hexagonal cells to form honeycombs, layers of which make up the whole of the hive. As a disclaimer, honeycomb is a slightly inaccurate descriptor as it’s used throughout the hive, not just in the places where honey is stored.

Looking inside the hive, they generally follow the same pattern. The highest layers are used to store food – with honey at the top and pollen just below. Moving along down in the hive, next would be the brood cells, workers on top and drones below. Finally, somewhere near the bottom you’ll find the queen cells. Along the layers of the hive, small cavities are left for bees to travel throughout.

On a final note regarding wild beehives, bee professionals will – with varying degrees of impatience – point out that there is no such thing as a wild beehive. So, with a tip of the hat both to the entomologists and etymologists out there – a beehive in the wild should technically be called a bee nest. A beehive is a man-made structure. Speaking of which…

As far back as 4,400 years ago, it occurred to humans that digging honey out of a tree stump might not be the brightest of plans. Bees are, after all, armed and a bit partial about whether their homes get destroyed. Being the clever creatures that humans are, they realized that building artificial hives would make gathering honey far safer and easier.

We humans were decidedly bad landlords at first as early hives usually needed to be destroyed to extract the honey. They were basically little more than artificial hollows made of mud, brick or even straw. Thankfully, modern hives are designed to keep the colony and hive safe and in as good shape as possible.

Removable frames are now used to hold the layers of honeycomb. It not only minimizes destruction, it preserves the brood areas of the honeycomb to preserve the colony. This is possible because bees will segregate their honeycomb layers in a man-made hive just like they would in a wild nest – using different frames for honey, the brood and queen.

Anatomy of a Beehive

So, that’s the wild nest and the man-made hive – top to bottom. One last note on modern beehives though. Not only do they enable easier extraction of honey without hurting the colony, they’re also portable.

So, beekeepers are quite popular with farmers, transporting their colonies out to help farmers each year with their pollination services. In fact, bees are so vital to agriculture that companies specialize in bee removal from residential homes just to avoid exterminating them. Now that’s a valuable insect!

Are you in need of live bee removal for your San Diego home or business? Contact D-Tek Live Bee Removal today to get your estimate.