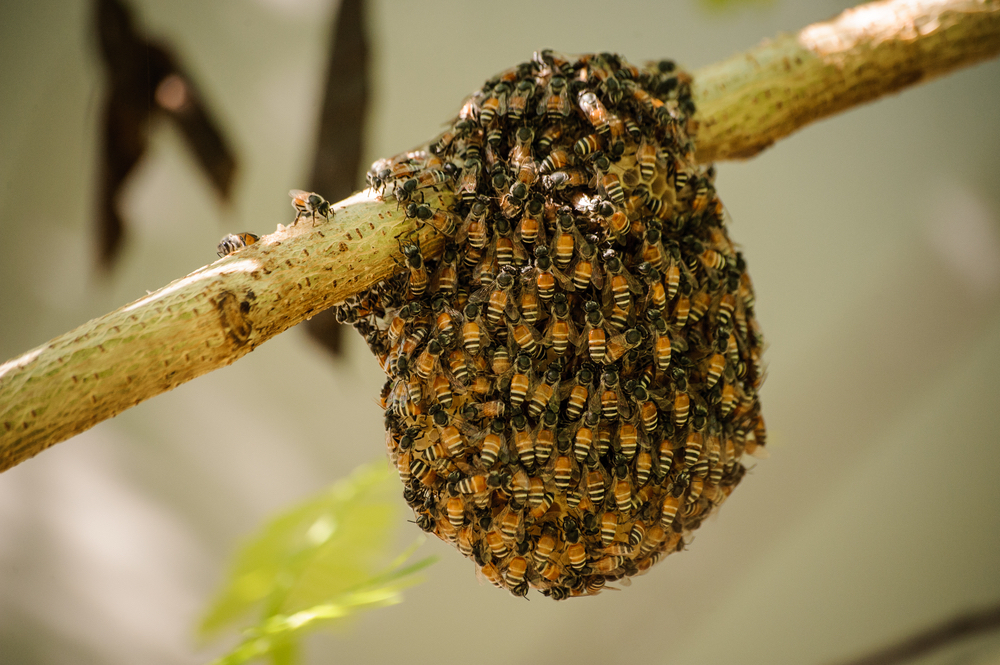 Swarming is a natural process, but it doesn’t make it any less unnerving! The site of a honey bee swarm can be scary, especially if they are hovering near your home or business.

While a swarm can certainly leave you speechless, it is also a pretty impressive sight to behold. Tens of thousands of bees huddled together temporarily while they search for a new home? Amazing!

Swarming typically occurs in the springtime when the weather warms and the flowers begin to bloom. A lot has been happening inside the hive. In fact, swarming is a honey bee behavior that is in response to a colony growing too large for their living quarters.

Why do honey bees swarm?

All honey bee colonies share one thing in common: the desire to produce more and more bees. When a colony grows too large, it will split in half. One half will remain in the hive with the new queen, while the other half will form a swarm with the old queen.

Specialized worker bees called scout bees have the job of finding a new headquarters for half of the hive. Prior to the departure of half of the hive, scout bees will look for a new nesting location. They will return to the hive with information about the site.

In the meantime, the colony is in the process of producing a new queen who will stay behind with her half of the colony. The old queen begins to prepare for one of her few journeys out of the hive. She will begin to eat less so she’s better able to fly for the hours or days it will require to move to their new home.

When do honey bees swarm?

Swarms typically occur in the springtime since this is when warmer temperatures begin and flowers bloom. However, swarming honey bees can also be found in the summertime or even in the early fall.

Once the bees have left the hive, they will typically place themselves somewhere nearby. San Diego residents who are lucky enough to spot a swarm will often see thousands of bees flying to a tree, a bush or some other structure.

The bees will remain in this spot until their new home is decided upon and ready. This can be several hours or even several days.

Although a swarm of honey bees looks intimidating, swarming bees are generally nothing to worry about. Like most honey bees, they may become aggressive if aggravated. Swarms tend to be docile for several reasons.

For one, they want to maintain their energy for their journey to their new nesting site. Attacking a human will require vast amounts of their energy and make it difficult for them to survive the swarm.

Another reason swarms are docile is because they are not protecting a hive or other resource such as honey or larvae. In most cases, a honey bees act aggressively because they are defending their nest and babies.

What should you do when you encounter a swarm?

If you feel the urge to call in expert live bee removal technicians, that is certainly a good tactic. While swarming honey bees are usually nothing to worry about, they can become aggressive if provoked. They can also become dangerous if they decide to swarm near the entrance to your home, garage or other place where humans must enter and exit a building.

Swarms generally do not last very long. In most cases, it is best to just let them do their thing for the few hours or days it takes for them to move on.

If you have concerns about a swarm or the location of a hive, contact the live bee removal experts at D-Tek Live Bee Removal in San Diego. We have over 15 years of experience helping our San Diego, Oceanside, Vista and Escondido neighbors handle a bee hive or swarm on their properties.