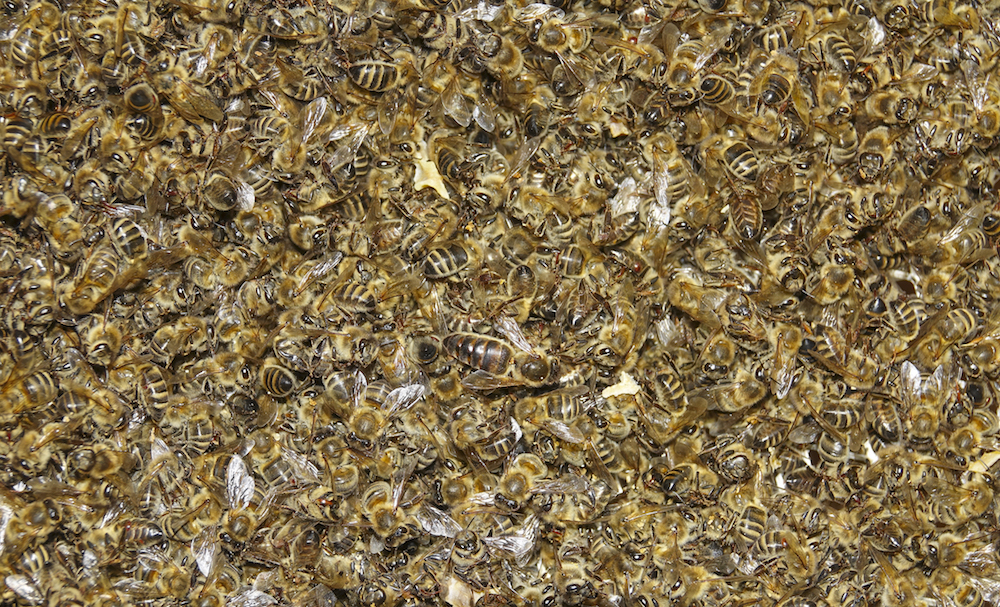 Oh no! You’ve found a beehive in your yard. Worse still, maybe you’ve noticed a line of them going back and forth through an opening into your attic. Your first reaction might be to reach for a can of wasp spray or call an exterminator. Before you do though, please consider this plea for the often maligned and underappreciated little bee.

We all have a healthy fear of being stung by a flying insect. It hurts and it can make relaxing outside nearly impossible if you’re worried about one of these little critters stabbing you in the arm. Yet, not all stinging insects are cut from the same cloth.

Bees are actually fairly peaceful, happy little creatures. Their days are filled with hopping from flower to flower, gathering nectar to support their hives. In the case of honeybees, they stay very busy making one of nature’s best sweet treats- honey!

Let’s also not forget one important fact about most bees – they can only sting once. So, to be fair, we’re not just relying on their pleasant dispositions to not sting us.

Suppose you are a honeybee, and some annoying human swats at you while you’re going about your day. You have a weapon. It’s not particularly lethal, but it will certainly make them regret swatting at you. Do you sting them?

Not so fast – let’s also consider that to sting them you’ll basically bisect your own body and, well…. die.  Not so keen to sting them now are you? The bee’s stinger has barbs along it. So when they sting something, it’s a one-way trip. They can’t remove it. So you really have to anger a bee to get stung.

Interestingly, the larger bumblebee is an exception to this rule. They can sting to their heart’s content as they have a smooth stinger. They just don’t. These plump, furry little bees just refuse to be in a bad mood. Unless you seem like a direct threat to them or their home, they want nothing more than to peacefully coexist.

Bees are vital for pollination.

Let’s dive straight into the math. Bees have an over-sized job to perform in the world of agriculture. Annually, they contribute $14 billion to crop production in the U.S. Out of the top 100 crops in the world, 70 of those depend on pollination. Those crops translate to a staggering 90% of the world’s nutrients.

According to the American Beekeeping Federation, out of every three bites of food you eat, bees are responsible for providing one. That’s a statistical average, mind you. If you’re last three bites were of a cheeseburger, bees had little to do with that. Or did they?

Interestingly, pollination isn’t just vital for growing the food we eat – it’s also vital for growing the food we feed to other stuff we intend to eat. Alfalfa, for instance, requires pollination to grow. That’s a staple for herbivores like cattle. No cattle food means no cattle. No cattle means no burger and no dairy. So it’s important to keep this in mind when looking at truly how important bees are to our food sources.

For the larger part of this century, bee populations have been in steep decline. In the U.S., it’s been about a 30% decrease in population annually. There’s no single cause, but instead a deadly confluence of factors including habitat loss, climate change, pesticides, disease and colony collapse disorder – a condition where most of the worker bees abandon their colony and leave it to die. In 2017, the U.S. put a bumblebee on the endangered species list for the first time.

No one, yourself included, likely wants to be added to any list called “a deadly confluence of factors”. So, if you’ve found a hive on your land or in your home, consider calling a live bee removal service instead. For a surprisingly reasonable fee, they will come out and remove the entire hive and relocate them where they can continue to live and do their part in keeping the system going.

Another advantage to removal versus extermination is that even if you do exterminate the hive, you still have to remove it. If you have literal honey inside your drywall and no bees to protect it anymore, you’ve basically just opened a 24/7 diner for every insect that can smell. Spoiler alert: that’s pretty much all of them.

One important note though: Do not try to remove the bees yourself. Some things you can fake being good at and some you can’t. Being an expert in bee removal is in the latter category – like being an astronaut. If you don’t know what you’re doing and faking your way along, your career will be brief and probably painful.

Mishandling a bee hive can get you severely stung many, many, many times over. As a parting statistic on the matter – bee removal is, on average, five times less expensive than the price of an ambulance. So save some money, call an expert and have your bees safely removed. And don’t forget to congratulate yourself on doing our ecosystem a favor!