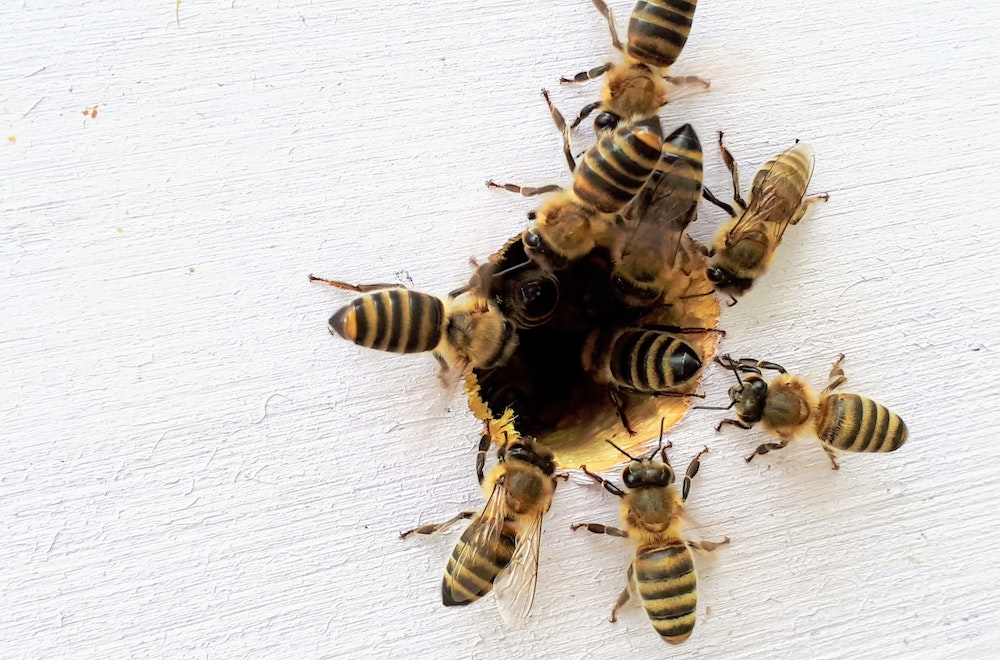 Bees are beneficial insects that have a major say on the planet’s food crop pollination. Their absence would shatter the intricate ecosystem balance and result in grave consequences beyond food shortages. The IUCN (International Union for Conservation of Nature) terms 7 bee species critically endangered, 101 as near threatened, 24 as vulnerable, and 46 as endangered. In North America, the bee population has declined by about 44% over the past 50 years. We explore the reasons behind these plummeting percentages and what you can do to help.

Reasons bees are in decline:

The Asian Hornet has become a major concern, particularly in Europe, with this species developing a sweet tooth for honeybees and having the ability to wipe out an entire hive. Hornets aside, there has also been a spike in the skunk population in the US among other predators who have honeybees on their menu. Additionally, in North America, there’s been an increase in vulnerability to fungal and bacterial diseases, which can be attributed in some part to the use of pesticides. These contain harmful chemicals thought to weaken the immune systems of insects, making them more susceptible to disease.

Insecticides are an obvious threat because they kill pollinators, but that damage is nothing compared to the effect of herbicides. Statistics indicate that farmers use herbicides five times more, and these wipe out plenty of wildflowers from which bees draw their resources. Moreover, studies show that these weed-killing chemicals can also have detrimental consequences on the health of honey bees as they interfere with vital gut microbes.

Some wild bees depend on a specific range of temperatures for their survival, and with global warming ever on the rise, it becomes harder for these bees to find a suitable habitat. Many bees have escaped to higher altitudes for relief as their living space continually shrinks each year.

There were more than 71,000 wildfires in the US in 2017, and 65,000 the year before that. Spiraling cases of forest fires are not only destroying the homes of wild bees but also the plants they depend on for food. Deforestation has also become a major concern.

How you can contribute to saving them:

Wildflower havens in your garden

Wildflowers are quickly disappearing by the day, which means bees have little to forage and consequently survive. Lend them a hand by sparing some space for wildflower strips so that honeybees, and other insects, have a safe food refuge.

Do you have a problem with ants? Soapy water is an effective solution. If you have a thriving field of vegetables, ladybugs are a precious asset to have. They feed on aphids and mites, among many other harmful plant pests. Every pest in your garden or home has a natural solution against it, and it’s important to avoid the chemical alternatives that hurt the good guys as well.

When you uncover an infestation in your home or place of work, opt for their humane and safe removal. Taking matters into your hands is not only bad for the world but could also result in severe injuries from a bunch of furious bees.

Leave out water for them

Water is an important resource for every animal on the planet. For bees, water offers an important ingredient for making nectar while it also comes in handy on hot summer days when some air conditioning is in order. You can live out clean water bowls (preferably shallow and wide) for them in your garden. Be sure to change the water regularly and incorporate some sort of landing pad, maybe a twig or stone, in the bowl so they don’t drown.

Several wildfires can be traced back to campfires. When you go camping and put up a fire, ensure the blaze is contained within a ring of huge rocks and that the flame is not close to any dry vegetation or trees that could quickly catch on. Be sure not to leave the fire unattended and that it is thoroughly extinguished by drenching the spot with water.

From almond to strawberry, bees are responsible for many of our favorite foods, and some of the plants we rely on for food would perish in their absence. So prioritize natural means of pest control, opt for their human removal if you have an infestation problem, and generally be mindful of the environment they call home. While honeybees are yet to feature on the endangered list, their dwindling numbers are cause for concern.