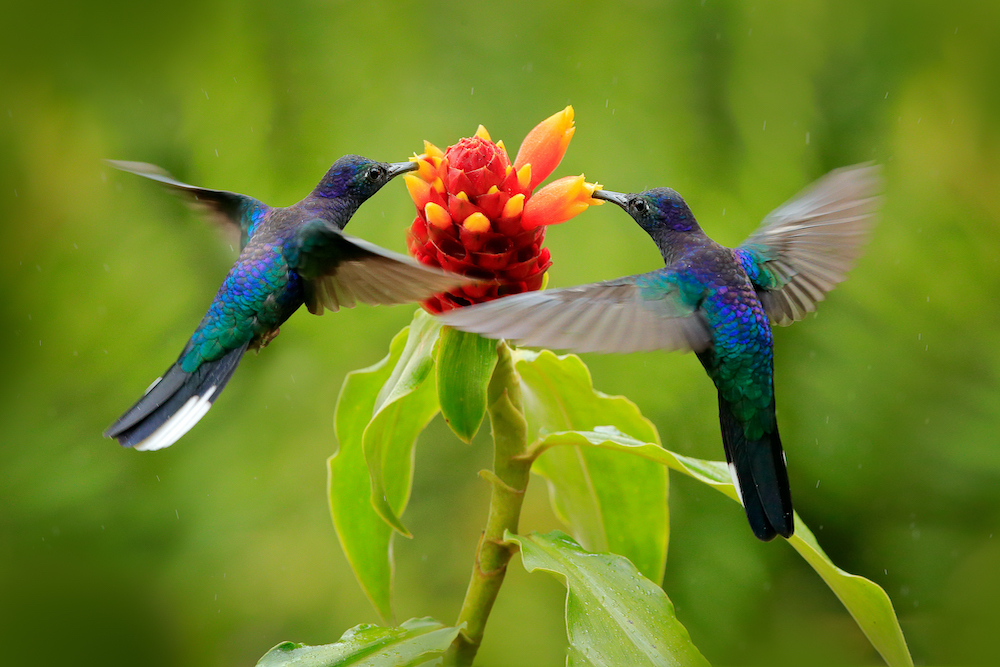 Over here at D-Tek Live Bee Removal, it’s no secret that we are big fans of the honeybee. We love their industrious natures and appreciate all the work they do to make honey and pollinate our flowers and crops. Without them, our food system would look dramatically different.

But did you know that bees are not the only pollinators? There are actually over 200,000 different kinds of insects, birds and mammals that pollinate plants. Although they don’t get as much attention as the honeybee, these species play a huge role in our ecosystem and they should be celebrated!

Let’s talk about pollination and learn a little more about some of the other vital pollinators.

Pollination is the fertilization of plants so that new plants can grow. How does this happen? Pollen is transferred from the male part of a flower (anther) to the female part of a flower (stigma). This transfer can happen in a few different ways, including wind, rain and animals. Some plants can even self-pollinate. After the transfer of pollen, fertilization occurs and the plant produces seeds. Seeds contain all the genetic information needed to produce a new plant, thus starting the process all over again.

Our animal pollinators are not just delivery drivers for plants. They get something out of the relationship too! For pollinators, including honeybees, the process is a significant way for the animals to get the valuable nutrients they need. Pollen is packed full of protein, while nectar is full of energy-rich carbohydrates.

Interestingly, pollinators probably have no idea that they are a part of such an important process. To honeybees and other animal pollinators, they simply stop by a flower for a quick bite to eat, grabbing the nectar and pollen they need before moving on to the next flower. Unbeknownst to them, little grains of pollen are stuck to their bodies, only to be deposited in another flower as the animal grabs its next meal.

Who are some of the biggest pollinators?

Most of us think of honeybees and butterflies when we think of animal pollinators. However, there are tens of thousands of other species that act as pollinators. These creatures are responsible for about 75% of the food grown around the world and play a huge role in keeping plant species healthy and prosperous.  Who are these pollinators?

The insect category includes some of the largest groups of pollinators, including the honeybee. Honeybees are even called “super pollinators” because of the wide range of plants they pollinate and their significant output. However, other insects actively pollinate flowers such as butterflies, flies, moths, beetles, mosquitoes, ants and wasps. These insects are responsible for the pollination of popular crops that fill our meal plates including almond, avocado, blueberries, chocolate, sugarcane, tomatoes and vanilla. Alfalfa, a primary food source for livestock, is pollinated by bees. Without an adequate alfalfa supply, we would produce significantly less meat.

Species of birds, especially the hummingbird, aid in pollination. You have probably seen hummingbirds, with their wings flapping a million miles an hour, feasting at a shrub, bush or flower. They have specially-adapted bills to help them access nectar found deep inside the flower. As they flit from shrub to shrub, pollen that has attached to their legs and bodies will transfer to new plants. Bird pollinators are also adept at dispersing seeds in the ecosystem. Birds play a part in pollinating bananas and many of the plants we see in our yards and gardens.

We bet you never thought about bats as pollinators! It’s true – bats are key pollinators for hundreds of species of plants, including avocados, bananas, coconuts, cocoa, dates, figs and mangoes. Bats can feed on nectar and pollen from flowers and munch on insects. Since bats are nocturnal animals, they get busy at night. They will focus their feeding on nocturnal blooming plants and insects that are active in the evenings.

Why are pollinators are important?

We’ve mentioned it a few times already, but it bears repeating. Pollinators such as honeybees, insects, birds and bats are responsible for much of the food and drink we consume on a daily basis. Your morning coffee, guacamole and chocolate ice cream are all produced because of the efforts of these amazing pollinators. Not only do their efforts continue the process of fertilization that is required for plant species to grow, but their work also helps protect plant populations and keeps our ecosystem thriving.

Posted in Bees and the Environment and tagged bats, hummingbirds, pollination, pollinators