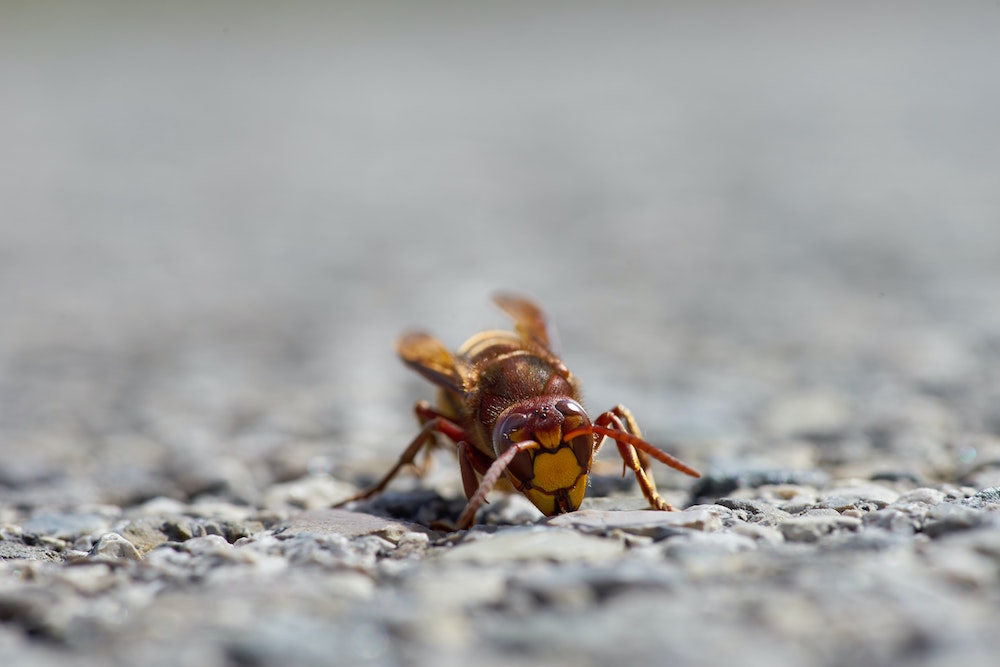 What’s the deal with the “murder hornet?”

Amid all the recent coronavirus and economic news, you might have heard some other unsettling news about the appearance of a new hornet in the United States. Known as “the murder hornet,” this giant Asian hornet (Vespa mandarinia) has a nasty sting and the ability to decapitate hundreds of honeybees.

Although the media sensationalized the story by giving them the murderous designation, we thought we would sift through some of the research to figure out if this hornet is really something we should worry about. After all, we have enough on our plates!

Some Basic Facts About V. mandarinia

When they say that this hornet is big, they aren’t kidding. As the largest hornet in the world, a queen can reach a length of about 2 inches and have a ¼ inch stinger. These hornets are found in Asia, including Russia, Japan, China, Korea and Thailand. They have distinctive orange and black markings.

Hornets usually hunt alone, but these hornets can join forces with other V. mandarinia in the late summer and early fall to organize group attacks on honeybees. This fact is what has beekeepers in the United States worried. Honeybees are threatened enough as it is, with disease and Varroa mites running rampant in many colonies. But more about that later.

How did the murder hornet get to the United States?

While researchers are not entirely sure how V. mandarinia arrived in the United States, the consensus is that they most likely hitched a ride on a shipping container. There have been four potential sightings of the hornets in the U.S., both in Washington state, and a colony of the big guys found in British Columbia, Canada. While this might seem like a small number of hornets, it’s important that Americans can identify the hornet to help researchers understand if the population is increasing.

Why are they a threat to honeybees?

Scientists agree that V. mandarinia is not a real threat to humans. Unless you disturb a nest or a beehive that they have taken over, humans do not need to worry too much about the hornet. However, if one does sting you, it will hurt – a lot. And, their venom is much more toxic than the bees and wasps we are used to seeing in North America.

The real concern when it comes to these hornets is our honeybee population. Honeybees in North America are of European descent, and they have not developed the defenses that the Asian honeybees have against V. mandarinia.

When a V. mandarinia spots a hive she wants to take over, she releases her pheromones. The Asian honeybees have learned to sense this odor, and they begin to prepare for an attack. The bees wait for the hornet to enter the hive, and, when she does, they surround her. Their intense buzzing increases the carbon dioxide levels and the temperature, causing the hornet to die. However, if the hornet has backup and more hornets enter the hive, the bees are in trouble.

Unfortunately, North American honeybees do not recognize the scent of the hornet’s pheromones. This is why bees are at such a significant risk if the hornets begin to establish or spread in North America.

What happens when the hornets successfully overtake a beehive? These hornets decapitate the adults and suck out the larvae and pupae. If a few hornets have attacked a hive, they could finish it off in a matter of hours.

Are murder hornets something we should be concerned about?

Most scientists agree that V. mandarinia is not really something to worry about. However, if we begin to see more of these hornets in North America, it will be cause for concern because of their potential to harm honeybee colonies.

We recommend that you Google some images of the giant Asian hornet so you are familiar with what it looks like. If you happen to see one, report it. This is the most effective way for scientists to identify if V. mandarinia is establishing colonies.