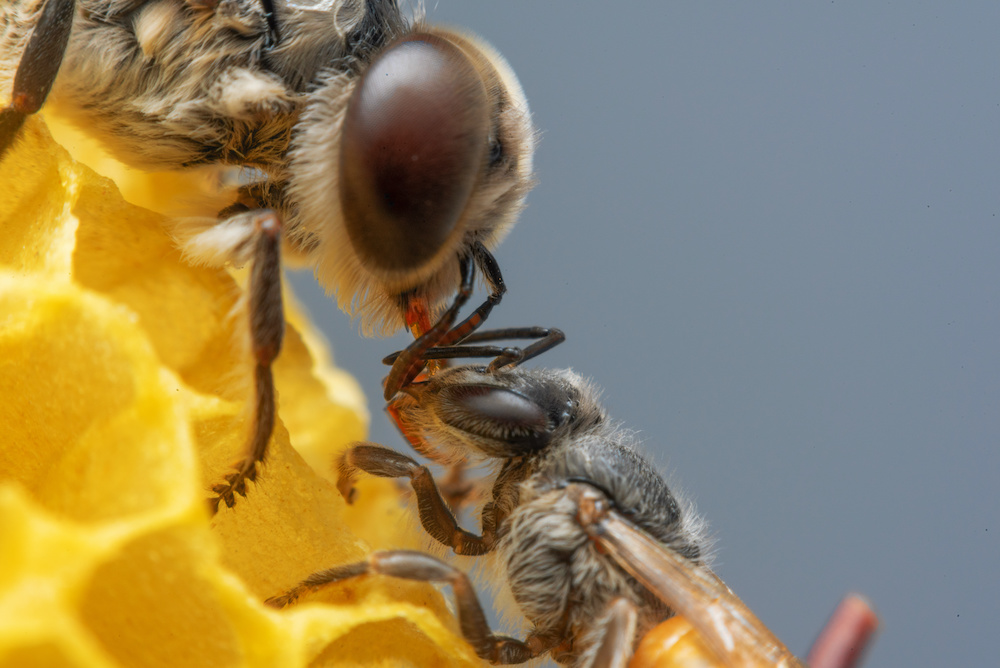 Beehives are fascinating places with quite the cast of characters. Workers and drones make up most of the population, but the queen bee gets all of the attention. And we think that the attention is well deserved! Although the worker bees carry out most of the jobs needed to keep the colony running, the queen is quite literally the mother of the hive. In fact, she lays an average of 2,000 eggs each day, making her primary responsibility the growth of the colony.

With such an important role to play, we thought we’d take time to answer some of the most common questions people have about the queen bee. You might be surprised by what you learn!

Your Most Buzzing Questions About the Queen Bee Answered

How does a bee become the queen?

Do you know the phrase “born not made?” It implies that something or someone has a certain innate characteristic. Well, this is not the case when it comes to the queen bee. In the hive, all worker bees are born identical, even the one that is destined to become the queen.

Most worker bee larvae are fed a substance called royal jelly for the first few days of their lives. This stuff is full of nutrients and helps boost development. After this period, most worker bees are switched to a new diet consisting of bee bread, a kind of mixture of pollen and nectar or honey. Some lucky larvae will continue to be fed royal jelly, allowing them to grow larger more quickly. These are our potential new queens!

Does the queen ever leave the hive?

She most certainly does, but not very often. The primary reason she will venture out of the hive is to mate. Mating flights are when she emerges from the hive in search of new drones from other colonies. She will spend about one week mating with several drones before returning to the hive to begin her job of laying eggs.

Other instances in which a queen might leave the hive involve swarming. Swarms occur when a colony has outgrown their current living situation and some of the group leaves to find a new home. The queen will take about half of the colony with her, leaving workers and the potential new queen behind.

On rare occasions, a queen may leave the hive due to sickness or injury. The eviction might be her decision or that of the worker bees. Unfortunately, she won’t be able to survive out there on her own and she will die soon after.

Does a sting from a queen bee hurt more than an average honeybee sting?

This is kind of a trick question. While the queen does have a stinger, she rarely has to use it. And if she does, her target is most likely her competition, not a human. What do we mean by this?

A honeybee colony is pretty smart if you haven’t noticed. When they are making a queen for the hive, they raise more than one potential queen, just to be on the safe side. The one cell that emerges first will become the queen if she first removes her competition. She will use her stinger to kill the other developing queens. And because she does not have a barbed stinger like the worker bees, she can sting multiple would-be queens in succession.

Learn more about why bees sting.

Honeybees are so amazing we really can’t stop buzzing about them! In particular, the queen bee has a fascinating origin story and function in the hive. And while she may not have all the glitz and glam of human royalty, we think that honeybee queens are pretty spectacular.