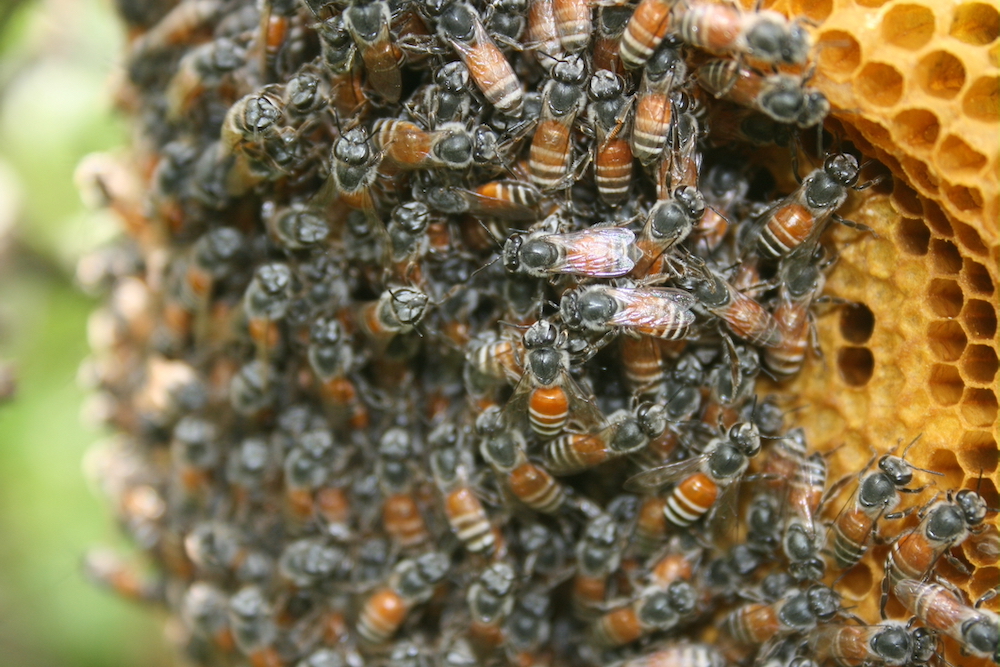 If you ask us, every bee in the hive is a fascinating creature! However, there’s one bee in particular that stands above the rest for her unique role in the survival of a honey bee colony. The queen bee differs from the other bees in the hive in a few key ways that allow her to orchestrate the entire colony and to ensure that it thrives as it prepares for the winter season.

Let’s learn a little more about the queen bee by sharing 5 interesting facts about her and her role in the colony.

Queen bees have a unique set of roles in the colony.

As we just mentioned, the queen bee plays a unique role in the hive. Her primary job is to mate with drone bees so that she can produce enough eggs to grow the colony. Very soon after she emerges from her cell, a new queen will begin to get to work finding suitable mates. During a mating flight, she will find eligible drones and mate with them, all while still buzzing through the air!

During these mating flights, it is common for a queen to mate with around 20 drones. She will store the sperm inside her body so that she can use it to fertilize eggs for years to come. A queen bee will lay an average of 2,000 to 3,000 eggs every day.

In addition to mating and producing eggs, the queen bee uses her pheromones to communicate with and influence the behavior of the rest of the hive. More about this later!

Queen bees are different than drones and workers.

Queens have different roles than the drones and worker honey bees. Although they may look similar, the queen bee is slightly larger than the worker bees. In addition to physical appearance, there are other important differences between the queen, drones and workers.

Drones have one role in the colony and that is to mate with the queen. In fact, after they successfully mate with the queen mid-air, they will die. Later on in the season, while the rest of the hive is preparing for winter, the drones don’t really add much to the survival of the colony. Primarily,  they eat and take up space. Because of this, they will often be kicked out of the hive as the winter approaches so that the rest of the colony can conserve its valuable resources.

Worker bees, on the other hand, hold many roles within the colony. Worker bees will forage for nectar, honey and water. They will work to build the beautiful, hexagonal-shaped honeycomb using their beeswax. Other worker bees take care of the young, clean the hive to ensure safe and sanitary conditions and defend the hive from its predators.

Despite their name, queen bees are more like conductors than rulers in the hive. Through the release of certain pheromones, she can communicate to the other members what to do and when. And it’s all for the survival of the colony!

For example, when worker bees cannot detect the odor of the queen bee because the colony has become too large, they will immediately begin the process of creating a new queen. This will begin swarming activity. During a honey bee swarm, worker bees will surround the queen as they exit the hive to find a new home. The remaining bees will stay at the old hive where a new queen bee has emerged to begin the process all over again.

Queen bees can be overthrown.

You may think the queen bee will always be royalty in the hive, but that is not always the case. If a queen is lacking in her egg-laying duties, for example, the colony will initiate the creation of a new queen. While this may seem harsh, it is all for the survival of the colony. If the queen is not producing enough eggs, they will not have enough workers to forage for food and perform the other tasks required to prepare them for the off season.

An interesting fact about honey bees is how they produce a new queen. At the beginning of their life cycles, all female bees are the same. Honey bee larvae will eat a diet of royal jelly for the first few days of their lives. After this, certain larvae will continue on this special diet, which provides them with the ingredients they need to become a queen bee.