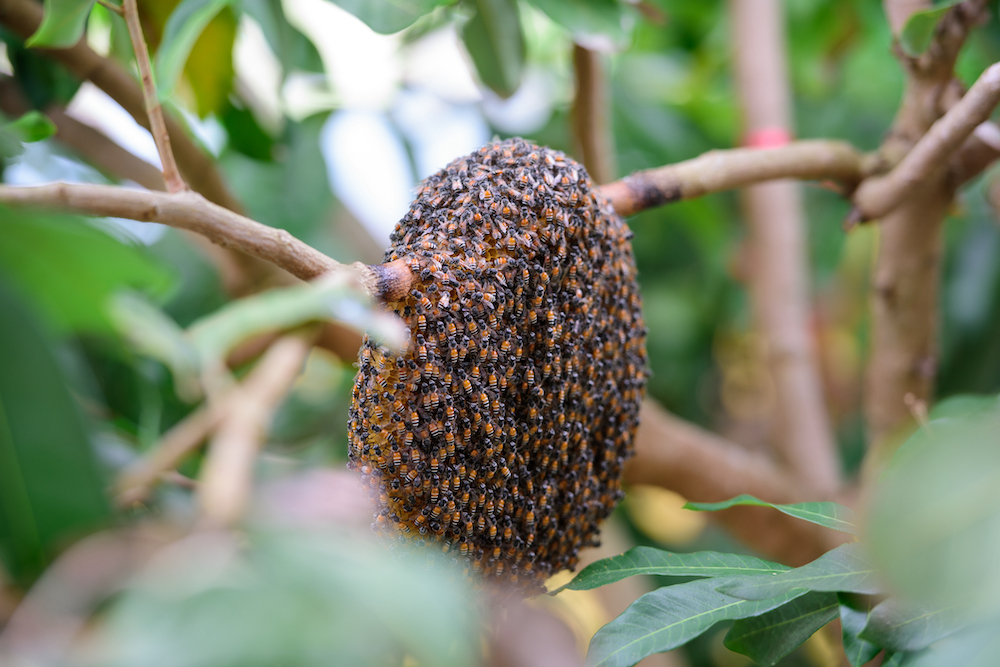 When we think of honey bees, most of us think about the adult form of the insect. The one that buzzes around our backyards and causes a little bit of anxiety when she gets too close. How often do you think about where these bees actually begin their journeys?

There are four main stages in the life cycle of a honey bee. So, let’s start at the beginning!

As many of you probably know, the queen bee is responsible for laying eggs. Several days after she leaves her cell, the new queen will leave the hive and fly to a nearby drone congregation area. This is where the male bees, also known as drones, hang around and wait for a queen to appear. She will know exactly where to go, and waste little time. After all, she needs to get back to the hive and begin her duties.

When they spot a queen bee, the drones will fly over her and attempt to position themselves just right so they can align their endophallus with the proper location on the queen. Drones only have one job in the colony, and that is to mate with a queen. In fact, after they successfully mate with a queen, they will die! They have fulfilled their duty and are no longer necessary for the survival of the colony.

A queen will take several mating flights so she can collect all the sperm she needs to grow her colony. When she is done, she will return to the hive and never leave again.

4 Stages in the Life Cycle of a Honey Bee

The life cycle stages are generally the same for all honey bees, no matter what caste of bee: drone, worker or queen. There are several unique differences that will help determine what kind of bee the egg develops into. For example, a drone bee takes longer to develop, averaging about 24 days. A queen will take about 16 days, and a worker bee will average 18-22 days to progress from egg to full-grown adult bee.

A hive is comprised of intricately-designed, hexagonal cells. Some of these cells will be used to store honey, and others will be used to incubate the eggs. Worker bees build cells to accommodate the future adult bee: horizontal cells for a queen bee and vertical cells for workers and drones. Some cells will be constructed larger than others, and these are specifically for drones who are larger in size than a typical worker bee.

A queen will lay eggs inside the cells based on the needs of the colony. She will decide if the egg should be fertilized (a worker bee or queen) or unfertilized (a drone). She will continue laying eggs until her store of sperm is depleted, which can take years!

Once the rest of the hive recognizes that she is slowing down in her role as the egg-layer, the rest of the hive will begin preparing for the creation of a new queen. They will construct queen cells and move fertilized eggs into them. The larvae will continue on a diet of royal jelly until the first, new queen bee emerges from the cell. She will become the new queen of the colony and quickly get rid of her competition, beginning the mating process all over again.

Three days after the egg is deposited into a cell, it moves to the next stage of the process. The egg develops into a larva, which looks like a small white worm. The larvae are cared for by nurse bees, who are worker bees whose primary job is to feed the developing bees.

Larvae are all fed the same thing for the first 3-4 days of their lives. Royal jelly is a substance that is produced by the nurse bees. Bee milk, as it is often called, contains high levels of protein, water, fats and vitamins to make it an ideal meal for the developing larvae. With this nutritious diet, the larvae develop fast and shed their outer skin several times to accommodate their growth.

Depending on the type of bee the larva is destined to become, the worker bees will seal off the egg cell with wax after about 6 days.

In the next stage of development, the larvae transform themselves significantly. They will build a cocoon around themselves. Inside, they will begin to develop all the characteristic traits of a honey bee, including wings, legs and abdomens. This stage will last 7 to 15 days depending on the type of adult honey bee.

Once they are ready to emerge, they will bust their way out of the wax-covered cell and join the rest of the hive to take on their role in the colony. They have finally reached the final stage of their life cycle – the adult stage!