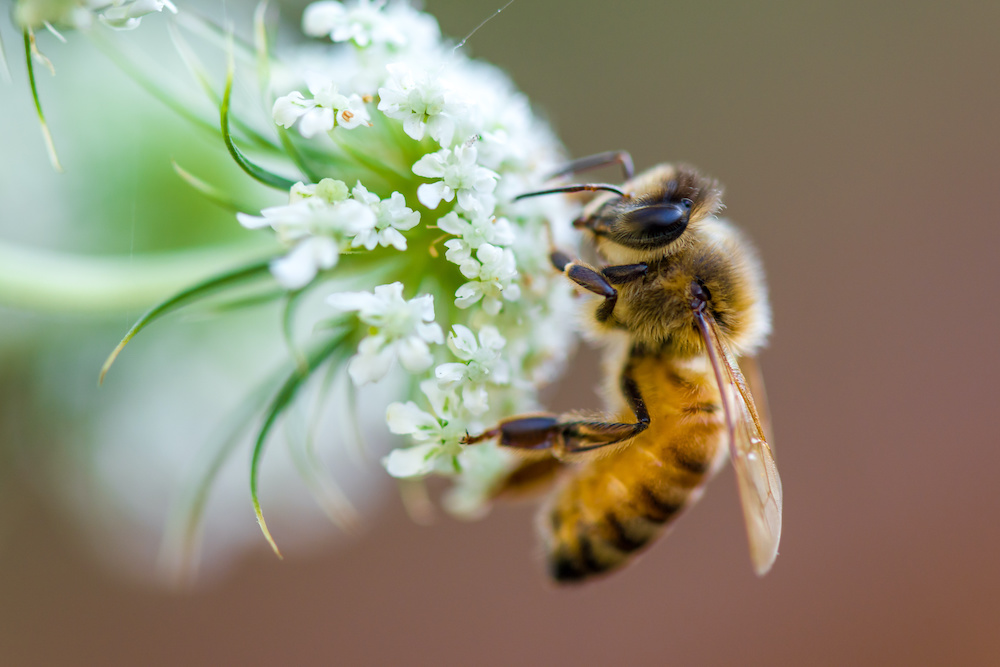 We focus a lot of our attention on the work that adult bees accomplish in their relatively short lives. From reproduction and pollination to making honey and building hives, honey bees are truly as busy as the old saying goes. One aspect of honey bee life that we spend less time discussing is their early lives.

A worker bee goes from a teeny, tiny egg to an adult bee in about three weeks. During that time, a lot happens inside the cells that house developing honey bees. Let’s explore the three stages of worker bee development and learn more about how worker bees become the powerhouses we know them to be.

But first, let’s talk a little about the queen. The primary role of the queen bee is reproduction. A queen bee can lay up to 2,000 eggs in a day. As you can imagine, that takes a lot of effort. To help her in her role, the worker bees feed and clean up after her so she can focus on her main responsibility.

When she’s ready, the queen will lay an egg in a small hexagonal structure made of beeswax called a cell. There are tens of thousands of cells in a typical beehive, most of which house developing workers and drones.

The queen secures one egg in a cell before moving on to the next one. Worker bee eggs look a lot like tiny grains of rice. They are covered with a special, eggshell-like substance that houses the ovum, yolk and developing cells. As the cells develop, they cause the egg to tilt, eventually causing it to rest on its side, instead of the vertical position it started in.

In three days time, the “shell” begins to dissolve. While this might not sound impressive, it’s actually quite a novel process. Most insects will break through their shells, leaving remnants behind. Honey bees, on the other hand, dissolve their shells and reuse it for nutrients.

We’ve now entered the larval stage! Honey bee larvae are still very small and worm-like, but no need to worry. Nursing bees will work hard to ensure that they have a continuous supply of food. In fact, all the larvae do is eat during this period of their lives. Their bodies have the parts necessary to take in food, but not much else.

In fact, the food they consume does not even exit their bodies yet, since they have not yet developed that part. Their closed intestine system serves a specific purpose. Because the larvae are not capable of removing their waste or transporting it out of their cells, it stays within their bodies until just before the pupal stage. This ensures that they don’t contaminate their food source.

The adult worker bees feed the larvae a diet of nutritious royal jelly for the first three days. After that, the larvae that will become your typical worker bees will cease getting royal jelly and begin a diet of honey and pollen. A larva that may be a future queen will continue to be fed the special royal jelly. With all of the feeding, it’s no wonder that larvae will grow to about 1500 times their original size during a 5-6 day period.  To accommodate the growing bee, it will molt several times during the larval stage.

Before moving to the final developmental stage, there is a two day period where the cell is capped by the adult worker bees so the developing larva can prepare for building its cocoon.

The final step before becoming a fully developed worker bee is the pupa stage. The larva will spin around inside the capped cell while releasing a silky substance until she is completely covered. Over the next 7-14 days in her cocoon, the bee will develop all the parts that look like the bees we know and love. When she is ready to emerge, she will break free through the beeswax and begin her life as an adult worker bee.

I think we can all agree that developing bees go through a lot in the course of three short weeks! If you’d like to learn more about the role of the adult worker bee, check out the article The Many Jobs of Worker Bees.