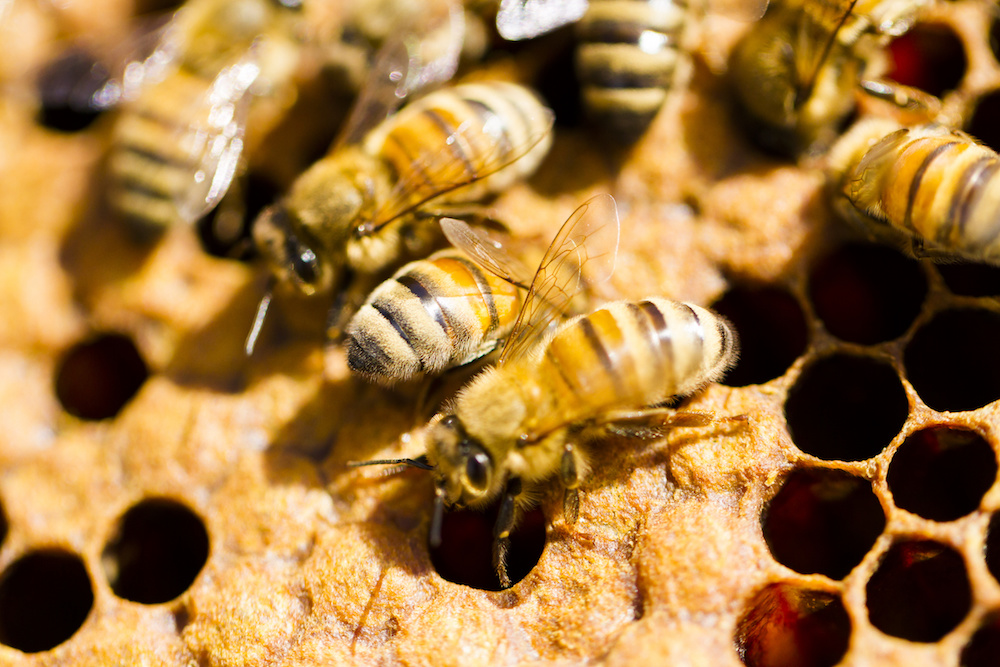 What do you think of when you think about honeybees? Maybe a creature buzzing around collecting nectar, making honey and being a bit of a nuisance during your summer BBQ? While this might be an accurate perception of the honeybee, it does not do the honeybee justice. In reality, honeybees play a critical role in our ecosystem. As one of the primary pollinators in the world, their work keeps flowers and crops thriving and our dinner plates full of the delicious, healthy foods we love.

But for such a small creature who lives a relatively short lifespan, the lifecycle of the honeybee is fascinating. Today we are going to dive into the hive to learn more about the development of honeybees from eggs to adults. We will also explore the life expectancies of the different types of bees inside the hive. Let’s dive in!

The Life Cycle of the Honeybee

First, we will go through the basic stages of a bee’s life, starting with the egg stage and ending with the adult stage.

The queen has two primary jobs throughout her life: mating and laying eggs. After she has mated, she will spend her days laying eggs – about 2,000 per day for her entire life. The eggs she produces can be male or female, depending on whether or not she has fertilized the egg. The non-fertilized eggs will become male, drone bees; the fertilized eggs will become female, worker bees (and maybe even a queen!) The queen will lay the eggs in the hive cells where they will be prepared for the next stage of life: larvae.

All larvae are fed royal jelly for the first three days of their lives. After three days, the workers and drones stop eating royal jelly. Bees that are destined to become the queen, however, will continue to feast on royal jelly. During this phase, adult worker bees will cap the hive cells with beeswax to allow the larvae to continue to develop to the next stage: pupae.

This is where the real development of the bee begins. While cozied up inside the cell, the bees begin to take on the appearance of the bees we are accustomed to seeing. They begin to develop hair and other bodily features such as wings and legs.

When the bee is ready to emerge in its adult form, it will escape the cell and join the rest of the colony. Depending on the type of honeybee, they will emerge at different times and begin doing different jobs. Let’s explore the average length of time it takes for each type of bee to develop from egg to adult:

Development Time from Egg to Adult

In this post, we won’t go into the roles of the queen, worker and drone. However, it’s essential to know that each bee has a particular job to do from the moment they become an adult. The type of work they do can impact their life expectancies. For example, the life span of a worker bee can vary depending on the season. They are also more likely to encounter predators (like humans!) while foraging, which can significantly decrease their life expectancies.

The Life Expectancy of Honeybees

As we mentioned earlier, one of the primary roles of the queen is to produce eggs. You might think she has it pretty easy; however, the colony has a close eye on her. If they see that she is producing fewer eggs, she will be replaced! Queens live an average of 3 to 4 years, but can live up to 7 years.

The life expectancy of the worker bee depends largely on when they were born. Bees that are born during the “busy season” from late spring to early fall will live approximately six weeks. They have a short lifespan because they will be working hard during the summer and early fall months as foragers, nurses and housekeepers, among other things.

Worker bees that are born after the busy season still have an important job to do, but one that is not nearly as strenuous of the “busy season” bees. Their primary responsibility is to ensure the care, comfort and protection of the queen during the cold winter months. These worker bees may live between 4 and 5 months.

The drones have a fairly sad story. Their primary job is to mate with the queen. And as soon as they do, they die! For those who have not mated with the queen and have made it until the winter, their fate is no better. Drones don’t contribute much to the hive. They do not forage nectar or pollen, and they do not assist in making honey. Instead, they eat! Because of this, the drones are ejected from the hive in the winter when hive resources are too valuable to waste. For a drone that does not die from mating or die from eviction from the hive, he will live between 5 and 7 weeks.