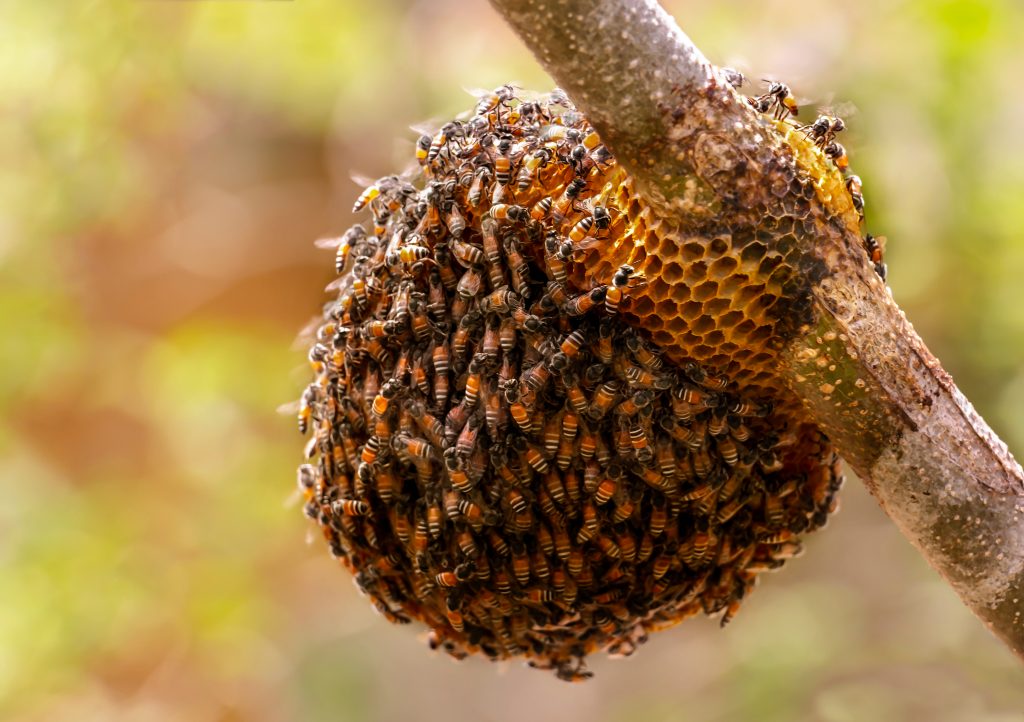 No matter where you live in San Diego, you can’t escape honey bees. Throughout the city, bees can make their homes in the most unlikely of places, including in and around your home. If you see them buzzing in the area, it may be tempting to try to find and remove the bee hive yourself.

But, let us assure you that this is not a good idea. It is best to call D-Tek Live Bee Removal, the experts in live bee removal, to remove the bees safely and effectively. In case you’re still considering this a DIY project, here are the top reasons not to do it yourself.

The first thing to understand is that honey bees are highly defensive creatures, and your behavior can play a large role in how they react. If they sense a threat or disturbance to their hive or queen, they will jump into action and try to attack that threat. In most cases, bees attack in order to defend their colony.

If there’s a hive around your home—especially with bees actively flying in and out—do not approach it. When a hive is disturbed, surrounding bees will release an alarm pheromone alerting other hive members to swarm. Those in the hive will begin pouring out to attack the nearby threat.

Bee stings can be dangerous.

One bee sting might just seem like a discomfort, but when you’re dealing with thousands of bees, it could be very harmful and potentially deadly. Bee stings are painful and they can cause swelling. This can be even worse for people with a bee sting allergy, triggering a more serious immune system reaction. Many don’t even realize they’re allergic until stung for the first time, and some of these reactions can be potentially life threatening. When dealing with a bee hive directly, you’re risking being stung by potentially thousands of bees. That many bee stings can be deadly or even have long-term effects on your health.

Bees attack in numbers, and they can be relentless.

While each individual can react differently to bee venom, without question it is best to avoid being stung by a swarm of bees. Bees often attack in numbers, with most swarms containing hundreds or thousands of bees. Honey bees will fly after their target at a speed of about 15 miles per hour, so if you’re fast you can outrun them. They are, however, persistent. Bees have been known to chase their targets over a considerable distance. One well known example is from a 2016 story where a swarm of bees chased a car for two days because they thought their queen was trapped inside.

Bees have even been known to chase their targets from land to water. It’s a common misconception that victims of bee attacks should jump into the water when being attacked by bees. While they may not dive under the surface after you, the bees will hover above the water, waiting for you to emerge. Eventually, when you need to come up for air, your face and head will be first out of the water for them to sting.

You can risk destroying the hive and bees inside.

Bee populations are currently in decline due to a variety of forces including climate change, increased use of pesticides, pollution and more. And, these striped creatures are incredibly vital to our ecosystem. They are some of the world’s most important pollinators, meaning they help transfer pollen from one plant to another to allow the plant to reproduce. These plants rely on bees and other pollinators to help with this process because they can’t complete it on their own. This natural relationship is necessary for our environment to produce flowers, crops and other important plants.

If you attempt to remove a hive without the proper expertise, you’ll risk damaging the hive and killing many of the bees inside. These important insects can’t afford any more casualties. While a fear of bees is natural, it can easily be forgotten when you realize how important they are to our ecosystem. So, let’s work together to save the bees and be ambassadors for conservation.

Trying to remove a bee hive yourself is a recipe for disaster. You’ll not only risk harming yourself, but also the bees themselves. Instead, call the San Diego experts in live bee removal at D-Tek Live Bee Removal. We’ll remove the bees and relocate them safely to an appropriate new habitat.