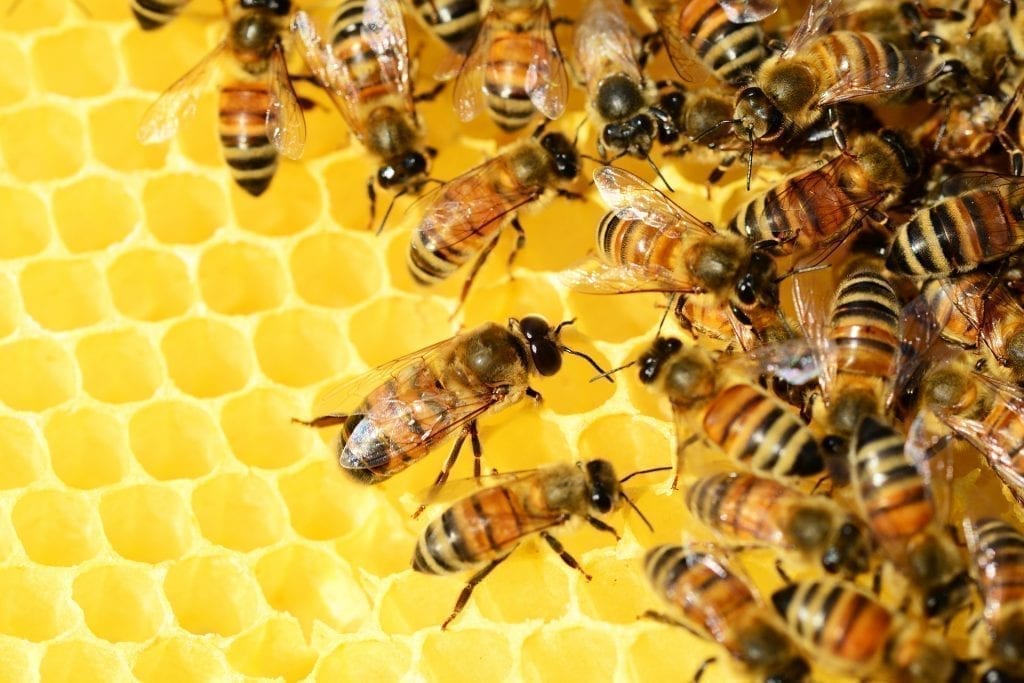 A honey bee hive is bustling with activity. During the course of an average day, the members of the hive perform a multitude of jobs to help sustain the colony. From producing new bees and caring for the young to foraging for food and finding a suitable home when the colony grows too large, the bees all band together to keep things running as they should. Although some might argue that the drones have it pretty easy, they still have their role to play!

They don’t call her the queen for nothing! While all bees play a role in the success of the hive, the queen bee may have the most important job – reproducing. The moniker is a little misleading, because even though she does hold an important role, she is not in charge of the other bees as you might expect.

The queen is the mother of the hive. She can lay about 2,000 eggs a day during the busiest bee season. To help her do this vital work, the worker bees tend to her every need; thus, the title of queen. In addition to laying eggs, the queen’s pheromones help maintain the status quo in the hive. Her scent signals to the other bees that she is alive and well, and that all is good in the colony.

The origin of the queen bee is quite an interesting story. Queens start off as a typical female egg. But instead of getting the normal diet of developing bees, would-be queens are fed a special diet of royal jelly. After about 16 days, the queen emerges as an adult bee and begins her search for drones for mating. More about drones later! After the mating ritual, the queen will store the sperm for her future use in a special organ called a spermatheca.

The worker bees are perhaps the busiest bees in the hive. These ladies started off the same as the queen, except they weren’t fed the royal diet. They develop a few special characteristics that set them apart from the queen. For example, the worker bee has a barbed stinger that will stick inside a victim and tear from the bee. This means that workers can only sting once before they die. Queens, on the other hand, have a less-barbed stinger that allows them to sting multiple times if necessary.

Workers also have structures known as pollen baskets to help them accomplish their foraging work. The worker bee will store pollen in the basket as she goes from flower to flower, before eventually returning to the hive with a full capacity.

Worker bees play multiple roles within the hive throughout their lives. As they age, they continue along a path of responsibilities. Young bees will work in the nursery caring for the larvae and pupae. Then, they might progress to other jobs such as cleaners, aides to the queen, builders, undertakers, cooks and finally foragers.

Last but not least, we have the drones. Drones are the male honey bees in the hive. They get less attention than their female counterparts, and perhaps it’s for good reason. They lead a generally “easy” life because their main job is to mate with a queen bee. Other than that, they primarily eat and take up space. If they don’t die after mating, they will eventually be kicked out of the hive as the colder months approach and the worker bees need to conserve their remaining resources. No use wasting honey on drones!

The honey bee hive is a complex system. In order for it to run as smoothly as it does, every bee must fulfill certain roles and responsibilities. The queen, workers and drones must band together to ensure the hive thrives and survives to see another season.